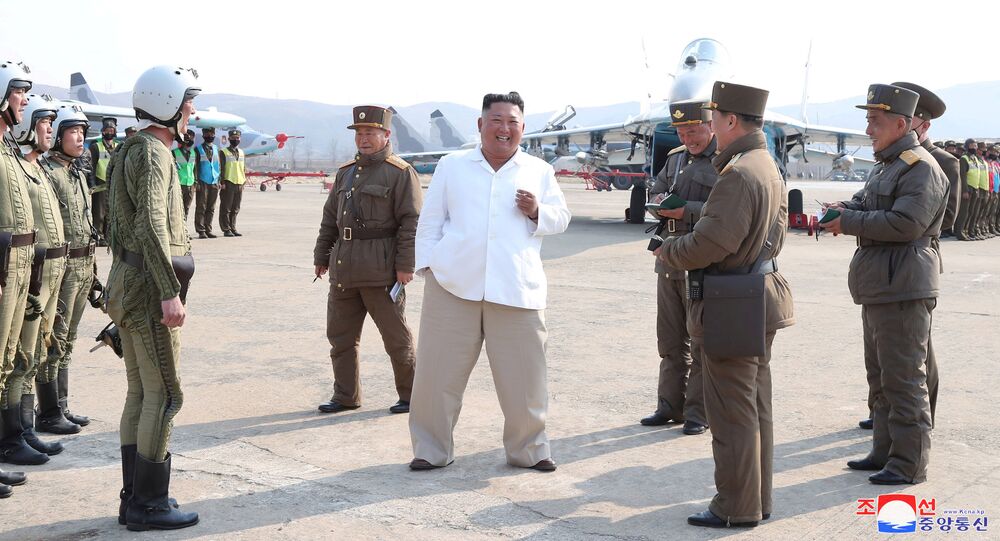 Despite rampant speculation in Western media about the fate of North Korean leader Kim Jong Un, leaders in South Korea are holding back on conclusions, noting the situation isn’t as unusual as it seems.

Rumors continue to swirl about the fate of Kim, chairman of the State Affairs Commission of the Democratic People’s Republic of Korea (DPRK), after his continued absence from the public eye was credited to a serious heart condition for which he required surgery.

The sole source for the claim remains a "US official with direct knowledge” who passed CNN the information on April 20.

No word has come from the DPRK on Kim’s condition as of yet, but the latest reports from the Korean Central News Agency (KCNA) have mentioned actions by Kim, including the sending of a fraternal letter to Syrian President Bashar al-Assad on Wednesday, hinting that Kim is alive and able to perform state functions.

However, for some observers, nothing but photographic evidence will confirm Kim’s vitality, and editors at the Korea Times were quick to note the shortage of pictures in news dispatches thus far.

“Such reports on the North Korean leader's diplomacy activities are seen as usual routine in state media, but are receiving significant attention this time,” the Korea Times wrote on Thursday, noting that “North Korean media has not been featuring images of Kim in reports of his letter diplomacy with partner countries.”

Still, officials in South Korea have remained calm and their responses measured.

A senior official from Cheong Wa Dae, the Blue House where South Korea’s president lives, told Seoul daily Chosun Ilbo that "Kim is believed to be staying outside of Pyongyang with his close advisers and appears to be performing his duties as usual."

Likewise, an official with South Korea’s Ministry of Unification told the Korea Times that while Kim’s absence from recent festivities was “unusual ... we need more time to see what is going on. When there were rumors that Kim Il Sung had been shot in 1986, North Korea showed images of him on state media instead of directly responding to the speculations. North Korea has never made an official response to such rumors on the death of its leader."

Sputnik reported on April 17 that Kim had been absent from Day of the Sun celebrations, which are among the socialist nation’s largest and which honor Kim’s grandfather, Kim Il Sung, a guerrilla leader who founded the DPRK in 1948 and led it for more than 40 years thereafter.

While health concerns were among the theories floated in the media, others included a possible coup d’etat or, more likely, an attempt by the youngest Kim to step out from the shadow of his grandfather as well as his father, Kim Jong Il, who ruled the DPRK from Kim Il Sung’s death in 1994 until his own in 2011.

Most recently, the conservative Japanese paper Yomiuri Shimbun reported that North Korean leaders had drawn up a contingency plan that would place in power Kim’s younger sister, Kim Yo Jong, in the event he could no longer lead.

The Associated Press has continued to fret as well, writing on Thursday morning that “there’s renewed worry about who’s next in line to run” the DPRK. AP also cited a Sejong Institute academic who pointed to Yo Jong as a likely successor, but also floated the idea of collective leadership headed by either Choe Ryong Hae, the nation’s most powerful lawmaker, or Kim Pyong Il, an aging uncle of Jong Un who presently serves as the country’s ambassador to the Czech Republic.

The Military Times went still further, warning that Kim’s exit from the diplomatic stage, whatever the cause, “could destabilize the region, create a massive refugee flow and force the US, South Korea and possibly other regional allies to react to the upheaval,” citing an academic at the neoconservative think tank Foundation for Defense of Democracies who said the conflagration would be far worse than the US wars in Afghanistan or Iraq.

Another dispatch from KCNA on Thursday noted Kim “received a floral basket from the Russian embassy.” Earlier this month, the South Korean Yonhap News Agency noted that Kim was expected to travel to Russia’s Far East for a meeting with Russian President Vladimir Putin before the end of the month, possibly on April 24. If the trip occurs, there will undoubtedly be enough photographs to assuage every journalist’s doubts.

Kim Jong-un’s Sis: Meet Lady Who’s Reportedly Been Prepared Since 2019 to Take Over as DPRK Leader