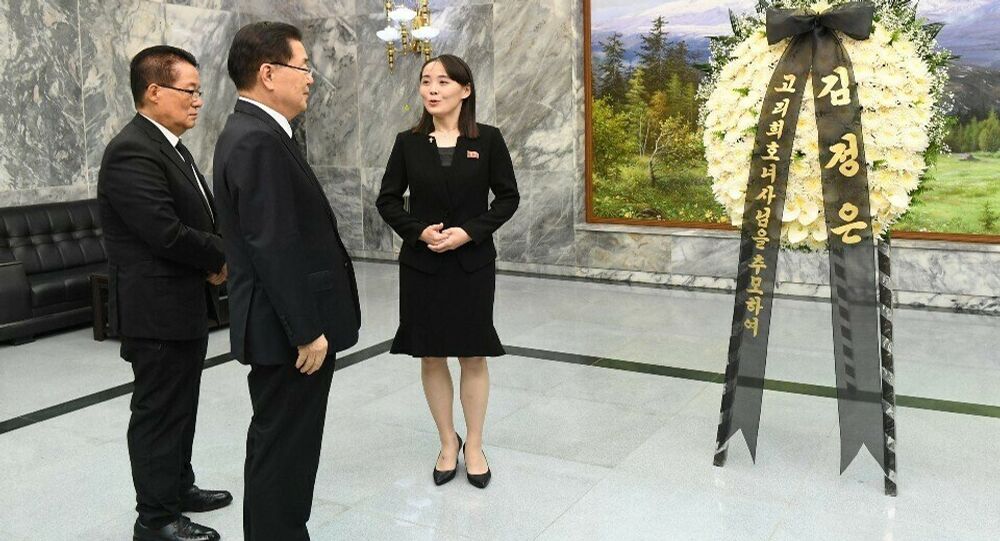 Kim Jong-un’s Sis: Meet Lady Who’s Reportedly Been Prepared Since 2019 to Take Over as DPRK Leader

Kim Jong-un’s younger sister, who is currently first vice-department director of the ruling Workers’ Party is believed to have been slowly but surely ascending through the party ranks for the past few years, and has recently been seen by her brother’s side at key political gatherings.

The Japanese newspaper Yomiuri Shimbun has reported, citing sources familiar with trilateral discussions between South Korea, the US, and Japan, that North Korea has been drawing up a contingency plan overseeing the transfer of power to Kim Jong-un’s younger sister, Kim Yo-jong, in the event of an emergency.

The report said that the North Korean Workers’ Party Central Committee had decided at an internal plenary meeting late last year that should Kim Jong-un die or be rendered unable to govern the country, Kim Yo-jong should take over.

Kim Yo-jong was given her first public role by her father in 2007, appointed as a junior cadre to the Korean Workers' Party, and she has since been steadily rising through the ranks during her brother's tenure.

Kim Yo-jong, who currently serves as first vice-department director of the Korean Workers' Party Central Committee, was thrust into the limelight when she represented North Korea at the 2018 Winter Olympics in South Korea.

During her visit to the south, Kim Yo-jong met with South Korean President Moon Jae-in and was pictured alongside Vice President Mike Pence.

The lady, who is believed to be Kim Jong-un’s most trusted aide, has since been present at several of Kim's key state meetings, such as his summits with President Donald Trump in Singapore and Hanoi, Vietnam last year.

After the failed summit in Hanoi she dropped out of the public eye for some time, but then reportedly returned to favour, and last month, made her first public statement. She delivered her country’s message addressing the US and South Korea: in March she branded the South a “frightened dog barking” after Seoul condemned a live-fire military exercise by the North. She also publicly lauded Donald Trump for sending Kim a letter in which he expressed hope of good bilateral ties and offered help in stemming the spread of COVID-19.

Last weekend, she was reinstated in the party’s powerful politburo, according to the state-run Korean Central News Agency.

The report about North Korea’s contingency plan came a day after CNN reported citing an unnamed US official that the US is now digging into "intelligence" that DPRK leader Kim Jong-un is in "grave danger" following surgery. South Korea-based Daily NK, an online newspaper that focuses on North Korea, reports that Kim underwent a cardiovascular procedure on 12 April.

The North Korean leader is known to have missed the celebration of his grandfather's birthday on 15 April, which led to widespread speculation about his well-being.

Donald Trump, who had previously more than once met with Kim Jong-un, addressed the speculation, stressing the reports were unconfirmed. So did the South Korean presidential office spokesperson, Kang Min-seok, asserting that "we have nothing to confirm and there has been no unusual activity detected in North Korea", according to the South Korean state-run Yonhap News Agency.