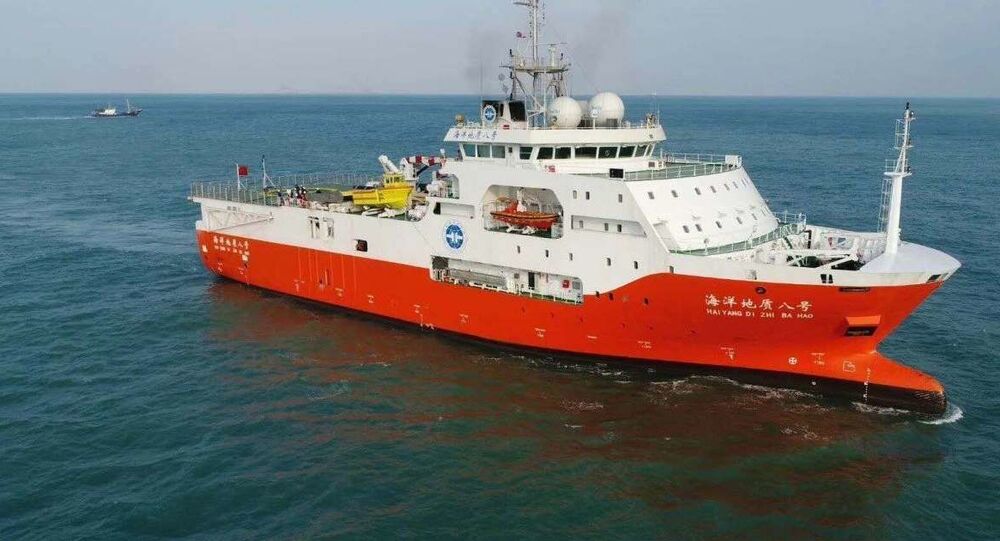 For years Beijing and Hanoi have locked horns over waters in the disputed South China Sea that Vietnam calls the East Sea. Such states and territories as Brunei, Indonesia, Malaysia, the Philippines, and Taiwan have also claims to the sea, some of which are overlapping.

A Chinese survey ship that was embroiled in a standoff  last year with Vietnamese vessels, has returned to South China Sea waters near Vietnam, according to data from the ship tracking website Marine Traffic.

The data revealed that the ship Haiyang Dizhi 8 appeared on Tuesday about 158 kilometres (98 miles) off the Vietnamese coast flanked by a Chinese Coast Guard vessel and shadowed by at least three Vietnamese vessels.

The statement comes after Vietnam lodged a diplomatic protest last week over what it said was the ramming and sinking of a Vietnamese fishing boat by a Chinese Coast Guard ship in the South China Sea.

Beijing responded by accusing the Vietnamese boat of illegally entering Chinese waters, claiming that the vessel had collided with the Chinese ship Haijing 4301 after conducting “dangerous actions".

The US State Department, in turn, said that it was “seriously concerned” about the incident, urging China “to remain focused on supporting international efforts to combat the global pandemic, and to stop exploiting the distraction or vulnerability of other states to expand its unlawful claims in the South China Sea”.

The Chinese news outlet Global Times, for its part, asserted that Vietnam had used the fishing boat incident to distract from its “ineptitude” in tackling the coronavirus pandemic. The country, however, has thus far recorded zero deaths and only 267 confirmed cases of the disease, with its efforts to contain the outbreak earlier praised by the World Health Organisation.

During last year’s standoff, the Haiyang Dizhi 8 reportedly carried out oil exploration surveys near Vietnam’s Exclusive Economic Zone (EEZ), while a Chinese Coast Guard vessel was for several weeks deployed close to a rig in a Vietnamese oil block.

Apart from Beijing and Hanoi, the Spratly Islands and Paracel Islands, which are among the more frequently disputed South China Sea territories, are also claimed by the Philippines, Brunei, Malaysia, and Taiwan. China has exerted de facto control over the Paracels since 1974.

Despite having no claims to the territories, the US is also actively engaged in the dispute, repeatedly sending its military vessels to the South China Sea to fulfil “freedom of navigation” missions. These draw harsh criticism from Beijing who describes such acts as “provocations".