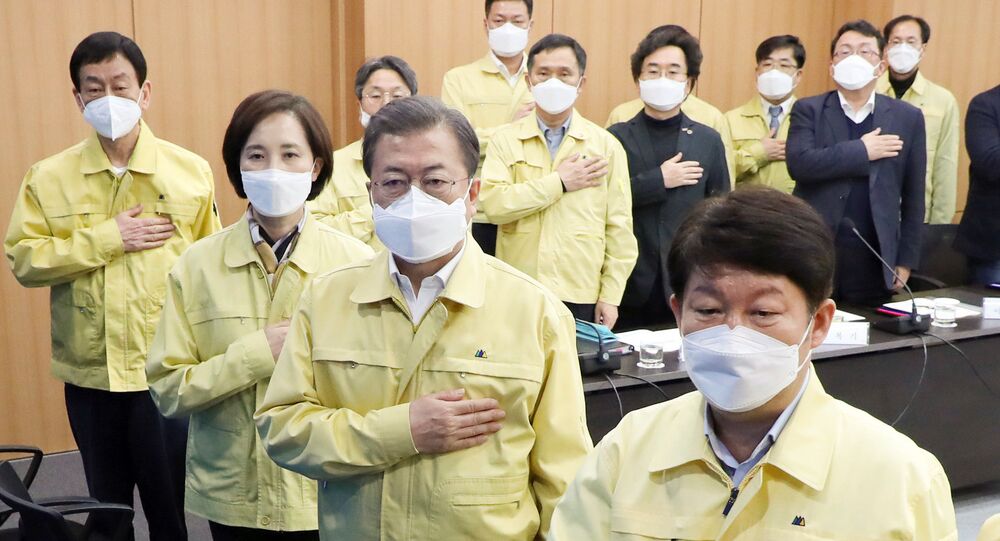 SEOUL (Sputnik) - More than 750,000 South Korean citizens have signed a petition calling for the impeachment of President Moon Jae-in over his handling of the coronavirus outbreak.

The petition was started on February 4 on the presidential website and by law must garner over 200,000 signatures in a month for the Blue House — the president's administration — to officially respond.

The author of the petition took aim at Moon’s inaction in combating the spread of the coronavirus disease (COVID-19). The disease has so far infected over 1,000 people in the country and led to the deaths of 12 people.

"Watching President Moon respond to the [COVID-19] outbreak, it is like looking at the president of China, not the president of Korea," the petitioner wrote, according to translations provided by the Korea Herald.

The petitioner criticized Moon for sending protective masks to China, where the disease originated from, instead of banning Chinese citizens from entering the country.

"The most important thing for the president of the Republic of Korea is protecting their own people. Had he thought of his fellow Koreans, he should have banned the entry of visitors from all parts of China," the petition read.

The petitioner claimed that merely denying entry to people who had visited China's city of Wuhan, the epicentre of the outbreak, was ineffective, as up to 5 million people had left the city before it was placed under quarantine.

© REUTERS / JONATHAN ERNST
President Donald Trump Is Furious About Stock Markets Crashing Due to Coronavirus Fears - Report
Outside China, South Korea has experienced the largest COVID-19 outbreak. Iran and Italy are not far behind, having seen a surge in cases over the past week. In total, over 30 countries have detected the disease on their soil.