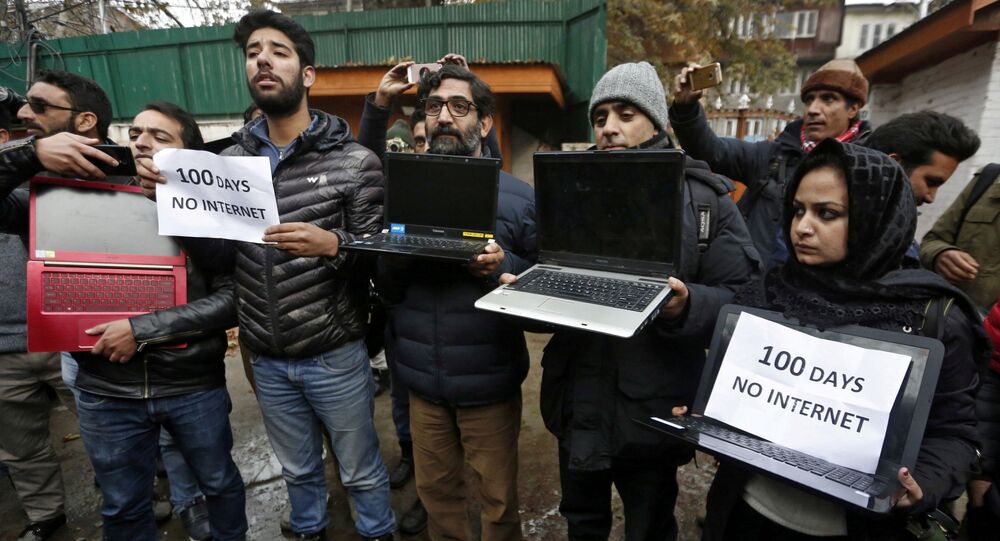 NEW DELHI (Sputnik) - Broadband and mobile internet services have been restored in the entire Northern Indian union territory of Jammu and Kashmir, but with certain website restrictions, the Indian NDTV news broadcaster reported on 25 January.

Internet connection in the region will be carried out using the relatively slow 2G technology.

"It is hereby directed that mobile data services and Internet access through fixed-line shall be allowed across the union territory of Jammu and Kashmir with the following restrictions... The aforesaid direction shall come into effect from January 25, 2020, and remain in force till January 31, 2020, unless modified earlier", the media outlet cited the order by the home department of the union territory administration issued on 24 January.

Last week, internet services were restored to certain parts of Jammu and Kashmir.

© AP Photo / Mukhtar Khan
Indian Security Forces in Jammu and Kashmir Reportedly Gun Down Key Hizbul Mujahideen Terrorist
On 10 January, the Indian Supreme Court ruled to immediately restore internet access in the Northern Indian union territory, giving local authorities a week to revise the government-imposed ban. The judges stated that freedom of speech and expression rests upon the right to access the internet.

Indian authorities have restricted internet access in Jammu and Kashmir since August, after New Delhi revoked the region's autonomy and split it into two territories under direct federal control. The government claimed that the ban was necessary to keep order in the region, in addition to imposing a curfew and deploying additional military personnel.