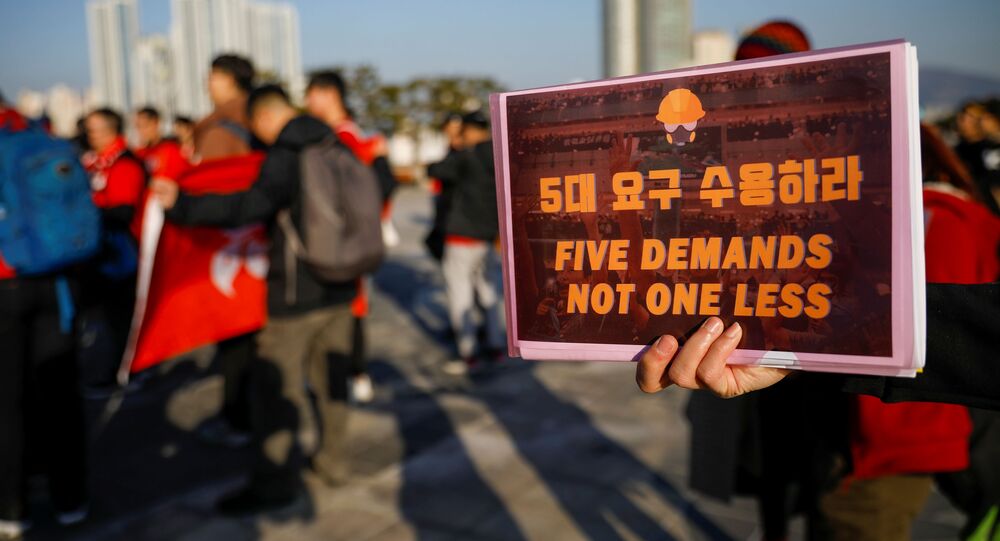 At least four individuals have been arrested and approximately $9 million (HK$70 million) was recently frozen after a Hong Kong Police Force (HKPF) probe busted a money laundering syndicate which obtained donations under the guise of supporting demonstrators arrested during anti-government protests.

"We found the donated money was transferred to a shell company, and a significant portion of this money was invested in personal insurance products," Senior Superintendent Chan Wai Kei of the Financial Investigation Division of the Narcotics Bureau said during a Thursday press conference, according to a translation by Channel News Asia. "The beneficiary of these products is the person in charge of the shell company."

The arrestees were identified as three men and one woman ranging in age from 17 to 50.

Authorities noted that the organization in question is Spark Alliance - an online non-profit platform that was founded in 2016 and raises money for Hong Kong protesters via donations. The HKPF described the group’s website as a “prominent online fundraising platform for the current civil unrest,” reported the Hong Kong Free Press.

Police claimed their probe was launched following the detection of “suspicious financial transactions” that have occurred alongside the anti-government demonstrations that have been taking place across the semi-autonomous city.

Chan noted that, due to the items obtained, authorities “do not exclude the possibility” that the organization was luring teenagers to join the demonstrations with a “reward” system.

Spark Alliance took to social media on Thursday and claimed that the HKPF was “smearing” its name.

“The platform condemns the police's attempt to twist the operation of the platform into malicious uses such as money laundering and other support channels,” the group said in a translated Facebook post.

This bust by the HKPF comes shortly after Hong Kong’s Security Bureau announced the completion of research pertaining to a newly proposed law which seeks to ban Hong Kongers from insulting public officials - including police officers. Though a decision date has not yet been set, lawmakers are already divided on how the legislation brought to the table could impact citizens’ behavior and their view of Hong Kong officials.