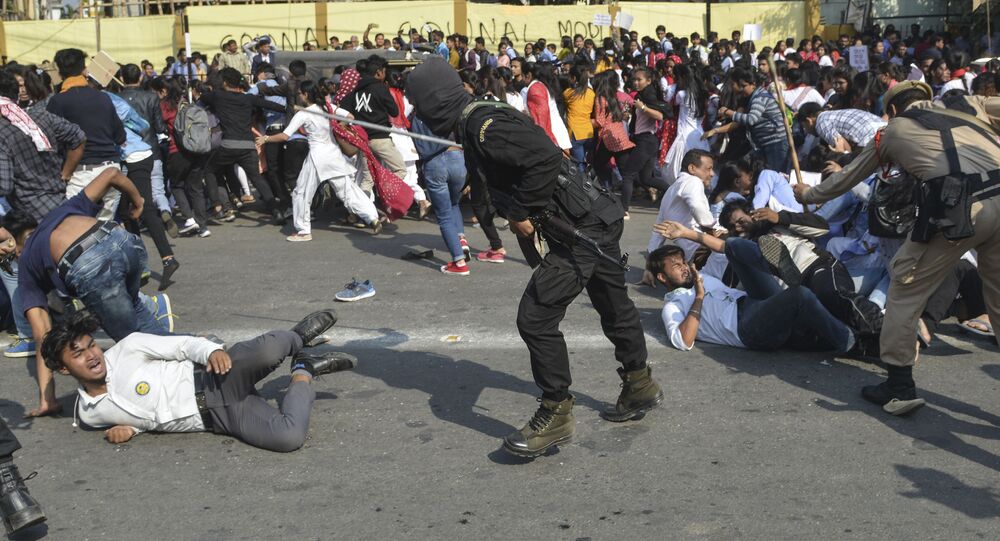 New Delhi (Sputnik): Protests in northeastern India against a controversial law to grant citizenship to illegal immigrants from Afghanistan, Bangladesh, and Pakistan, barring Muslims continued for the third day, with incidents of arson and torching of trains and railway stations in eastern West Bengal.

The death toll in police firing on violent protesters in India’s northeastern state of Assam, the hub of violent agitations against the Citizenship (Amendment) Bill, has risen to six, with two more succumbing to burns, when arsonists torched an oil tanker.

The legislation was passed by the Indian Parliament last week and received presidential assent to become a law.

On Sunday, prohibitory orders were relaxed in parts of Assam. Train and air service were partially restored, but 35 short distance trains remained cancelled on Sunday.

Meanwhile, State Chief Sarbananda Sonowal assured he is committed to protect all legal Indian citizens and the rights of the people of Assam.

We are committed to protect all genuine Indian citizens and the rights of the people of Assam.

I call upon all sections of the society to thwart the elements who are misleading the people on #CAA & indulging in violence and together continue the growth journey of Assam. pic.twitter.com/RTGeWO2QCI

​Protests against the law have spread to eastern West Bengal, national capital New Delhi, and the southern state of Kerala. In the Murshidabad district of West Bengal, which shares a border with Bangladesh, protesters torched several coaches on passenger trains and two local railway stations, one in the neighbouring Malda district on Saturday.

India’s federal Home Minister Amit Shah has accused opposition parties of instigating violence in the northeastern part of the country.

​In New Delhi hundreds of protesters gathered on Saturday to express their anguish over the controversial bill. Many voiced their concern that if the federal government orders revision of the National Register of Citizenship (NRC), as announced by federal Home Minister Amit Shah, they would be on the receiving end.

In the southern state of Kerala, arch political rivals, the ruling Communist Party (Marxist) and Indian National Congress said they would put aside their differences to protest against the new law on Monday, 16 December.