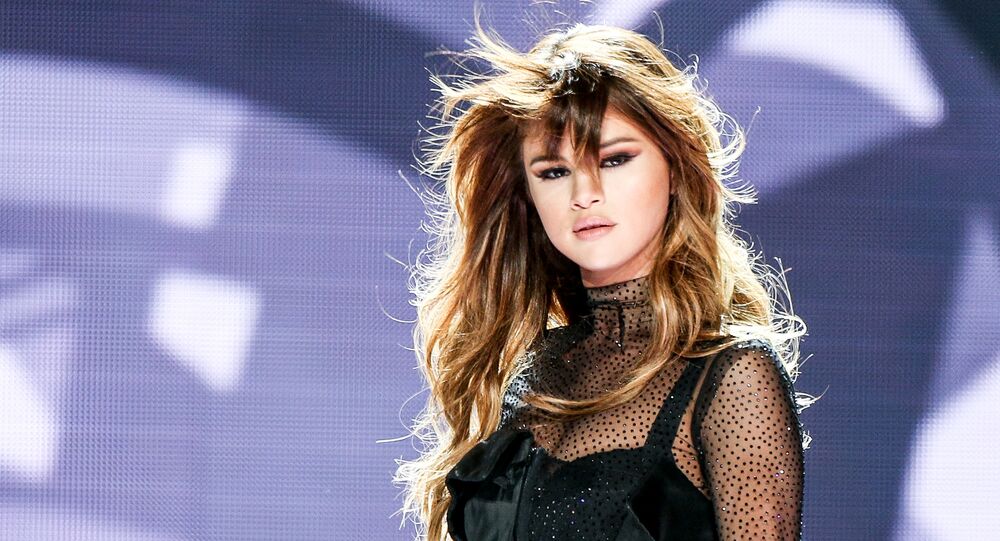 New Delhi (Sputnik): While books have held great respect among people of all faiths in India since time immemorial for being a great source of wisdom and knowledge and hence treated with the utmost respect, many Indians felt offended by a photoshoot of American singer Selena Gomez standing on books.

Singer-actress Selena Gomez has turned many heads with her sassy collegiate-themed photoshoot for a sportswear brand inside a school library. But she may have hardly thought it would evoke a sharp response from many Indians due to their feelings of reverence for books and respect as booklovers.

In her third collaboration with Puma, she is posing while standing and sitting on books.

The photographs are evoking a wave of responses on microblogging site Twitter from Indians, many of them condemning the 27-year-old for hurting their feelings.

I can only see PUMA on books 👎

In India if someone's feet touches a book inadvertently also he or she would touch the book to forehead in a gesture of apology. Here we have this lady standing on books with shoes on. Wonder if she ever visited a library before this photo shoot. https://t.co/gaqkGdmMKg

@PUMA Books in Hinduism are considered Goddess Saraswati and in Islam the very first verse of the Qur'an reads, “Among you the Most Generous is Who taught by the pen, taught man that which he knew not."
You are insulting our composite culture by such advertisements.

In India, books are also considered akin to the Goddess Saraswati, the Hindu goddess of knowledge, music, art, wisdom, and learning. Many people here touch books to their forehead as a sign of remorse in case they step on a book or it gets dropped on the floor by them.

Standing on and disrespecting books is the worst thing anyone can do. Maa Saraswati pls forgive her.

Puma also drew flak and was slammed for being “culturally insensitive”.

@PUMA ...is this a global campaign?? If yes, this is clearly a case of cultural insensitivity!!! Nobody steps on books. 👎

However, some contradicted the view point and called it a mere cultural difference.

I was taught the same practice in my childhood and I try to inculcate the same in my child.Books are superior to anything and everything.That's the greatness of the place we belong...
But blaming them for this may not be right as they have not been brought up with the same idea.

There r many pics of her. May b due to the cultural difference in India and US,she might’ve unaware about this “touching to forehead as gesture of apology”. In our belief bidya (education) regarded to goddess saraswati but they don’t. pic.twitter.com/0dSuUf9LFm

The new ruby-inspired collection also grabbed the headlines because it has a few personal details about Selena – a "92" imprinted on apparel, as well as a semi-colon, as a reference to the year she was born and tattoo on her wrist.