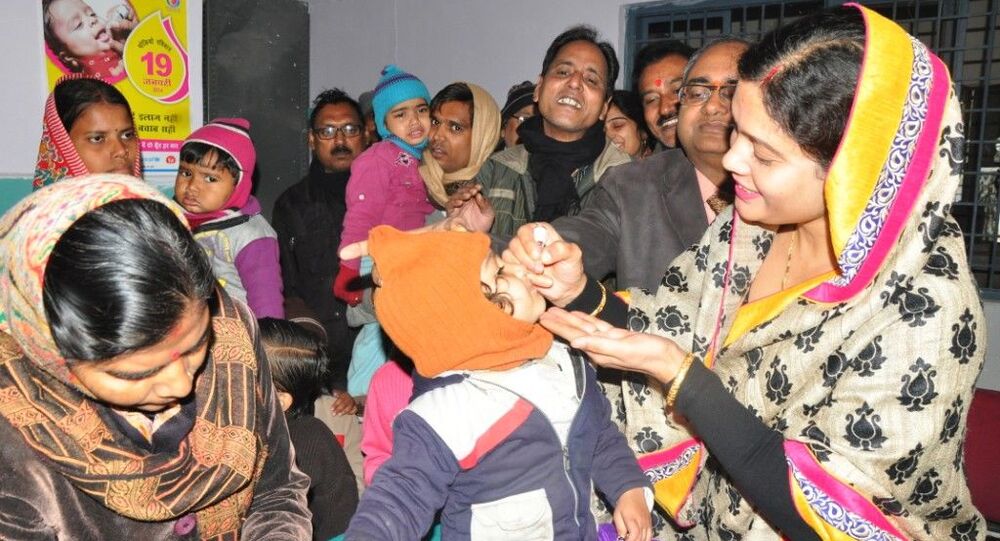 New Delhi (Sputnik): India launched a national campaign against Polio 25 years ago, responding to a call by the World Health Assembly. The first-ever national campaign to eradicate the crippling disease was called the “Pulse Polio Campaign” and was launched across the country on 2 October 1994.

It took India 21 years to attain polio-free status in 2014 with the World Health Organisation (WHO) describing the feat as "one of the most significant achievements in public health."

"In 1995, India launched its campaign against polio. Following India, most South-East Asian nations also adopted supplementary oral immunisation in 1996, joined by South Africa under the leadership of the late Nelson Mandela. "Now we want to recognise the contributions of a multitude of organisations and individuals as we mark 25 years of the campaign," said Dr Harsh Vardhan, federal Health and Family Welfare Minister.

The success of the Indian campaign against polio was achieved by unprecedented government leadership at the federal and provincial level towards this mass health initiative, and also the participation of state-run, private enterprises, civil society organisations, academic bodies and health workers.

According to the WHO, of the three types of wild poliovirus (WPV) – type 2 was officially declared eradicated in September 2015, while type 3 has not been detected since November 2012. Type 1 is probably the only wild poliovirus that remains in circulation, and only in two countries – Pakistan and Afghanistan. Pakistan reported 72 cases of type 1 WPV in 2019, while Afghanistan reported 21 cases.

Poliomyelitis (polio) is a highly infectious viral disease, which primarily affects young children. The virus is transmitted person-to-person mainly through the faecal-oral route or, less frequently, through contaminated water or food, it then multiplies in the intestines, and later invades the nervous system and can cause permanent nerve damage and paralysis.

Initial symptoms of polio include fever, fatigue, headache, vomiting, stiffness in the neck, and pain in the limbs. In a small percentage of cases, the disease causes paralysis, which is often permanent. There is no cure for polio, and it can only be prevented through immunisation.