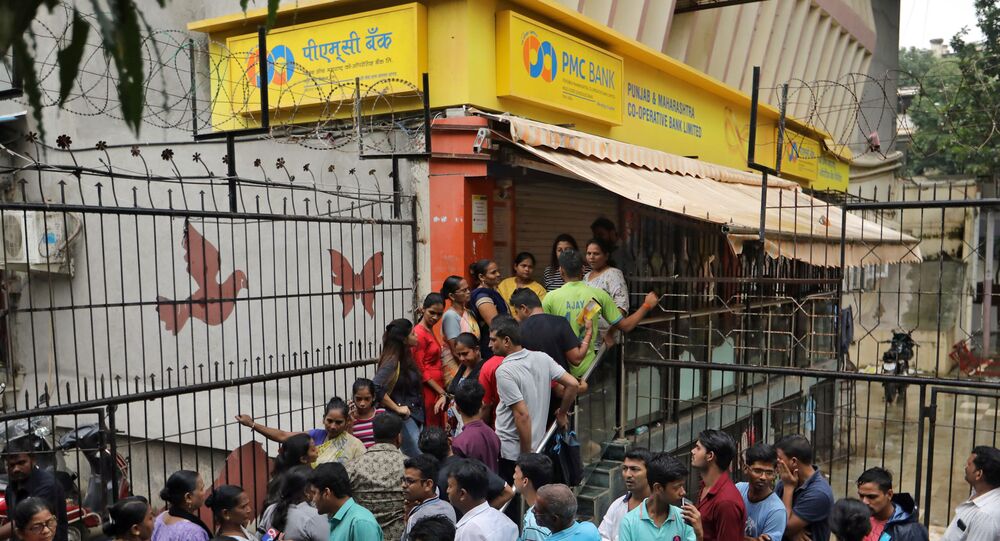 New Delhi (Sputnik): Mumbai-based Punjab and Maharashtra Co-operative Bank (PMC), once one of the nation's largest lenders, is now being intensely scrutinised by the Reserve Bank of India (RBI), the nation's central bank, after a whistleblower complained about the massive under-reporting of bad loans by the financial institution.

Three depositors of a failed private lender in India, Punjab and Maharashtra Co-operative Bank (PMC), died before they were able to withdraw their savings – two of them suffered fatal heart attacks, while a third allegedly committed suicide, local media reported.

Last week, Sanjay Gulati, an employee of the grounded private airliner Jet Airways who had lost his job, died of cardiac arrest. According to reports, his family has a total of four frozen accounts in the bank worth a combined total of approximately Rs. 9 mln (over $125,700).

Gulati, who had also been participating in the protests at the bank’s premises, died of cardiac arrest, unable to meet expenses related to his medical treatment or the education of his special needs son. A second depositor, Fattomal Punjabi, also died of cardiac arrest, and 39-year-old Dr. Nivedita Bijlani, who reportedly had about Rs. 10 mln (nearly $140,000) deposited in the bank, allegedly committed suicide by overdosing on sleeping pills.

PMC had given two-thirds of its deposits to a single real estate developer, which was already in dire financial trouble. A senior functionary of PMC has admitted to RBI that the actual liability of the real estate builder was over Rs. 65 billion ($908 mln) – equal to four times the regulatory cap, or almost 73 percent of the entire assets of the bank, Rs. 88 bln ($1.23 bln). In September, RBI placed the bank under administration for the next six months and restricted the withdrawal of money from customers’ accounts.

Federal Finance Minister Nirmala Sitharaman, who met the representatives of the depositors of the bank last week, said a group has been set up to study the workings of all multi-state cooperative banks and suggest regulatory measures and other failsafes to prevent similar defaults happening again. She also relayed that the central bank governor was aware of the plight of ordinary account holders anxious about the fate of their savings.

“I have talked to the RBI governor, and will also talk to him again, and convey the sense of urgency and distress that the clients of PMC have expressed before me, and will request that he expedite the clearing of or giving permission to withdrawal of their money which they have deposited (in the bank),” said Sitharaman.