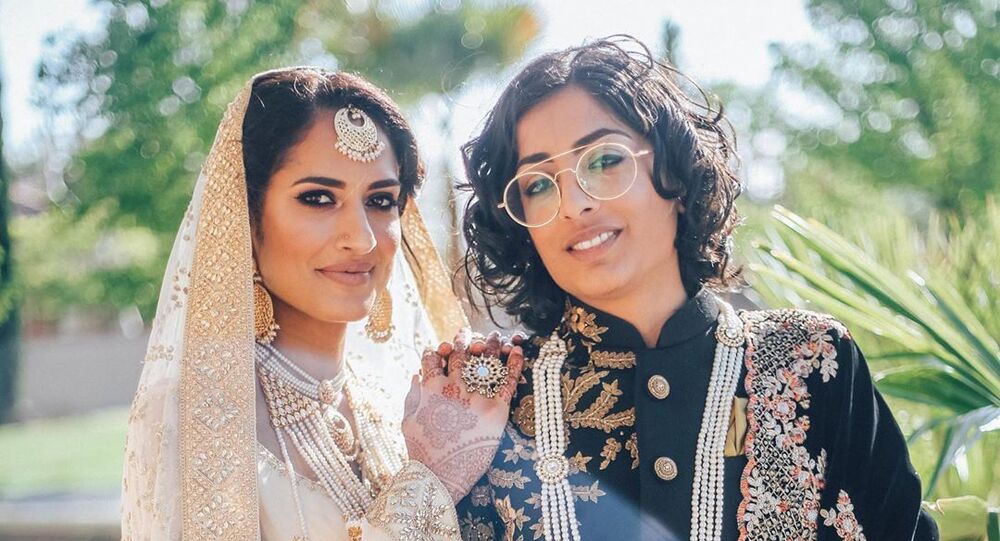 New Delhi (Sputnik): While Indian and Pakistani politicians are trading barbs amid escalating tensions in Kashmir, an India and Pakistani-origin lesbian couple has exchanged wedding vows in California.

Away from the acrimony that has impacted relations between India and Pakistan for decades, an Indian and Pakistani-origin lesbian couple have tied the knot in a grand Indian-style wedding in California.

Bianca Maieli, a Colombian-Indian Christian and Saima, a Pakistani Muslim, got married after dating for five years.

Life is sweeter with you. 4.20.19 💍⁣ ⁣ Photos by ⁣@sennaahmad Outfits by @bhkazimov

The two met through mutual friends at an event where they instantly connected and have been dating ever since.

Bianca was quoted saying by Indian wedding site Wedding Sutra, as saying:  “We’ve had many challenges before. But since we’ve been together those challenges have seemed less daunting when faced together. It truly feels like a blessing that we were able to find one another.”

She also revealed that neither of them was looking for a serious relationship initially but they instantly realised that they share a very special connection and wanted to be together forever.

“A few years into our relationship we started discussing the possibility of marriage. Saima even asked me about the kind of ring I was looking for but I wanted to propose to her and I decided to surprise her. I popped the question on a trip to Colombia,” Bianca said.

In the wedding, attended by their close family and friends, Saima wore a traditional bridegroom’s “Sherwani” while her better-half dazzled in a traditional Indian saree.

“I’m Colombian and Indian and come from a Christian background. My wife is Pakistani from a Muslim background. We were keen on incorporating facets of both cultures in a way that was respectful and personalised at the same time. We had four events, each with its own colour scheme and everything was mostly DIY,” Bianca added.

Looking through these photos of our mehndi brings me so much joy. Thank you to @sennaahmad for capturing these brilliant moments. One thing I noticed throughout this night was how much everyone was smiling and laughing. The joy & love was truly contagious and felt by all ❤️⁣ #loveislove ⁣ Outfits: @bhkazimov Venue: @greenbardistillery

The fairy-tale wedding took social media by storm with netizens calling it a tale of love beyond geographical confines.

Asian weddings are considered to be most regal and classy and the community members settled abroad We saw pictures from one such lesbian wedding on Instagrram a much in love same sex couple is breaking the internet for their day wedding in California, America. pic.twitter.com/B7VsIFNcqx

This Indo-Pak Lesbian Couple Looked Regal In Their Wedding Sari And Sherwani pic.twitter.com/UTKL6j7sq2