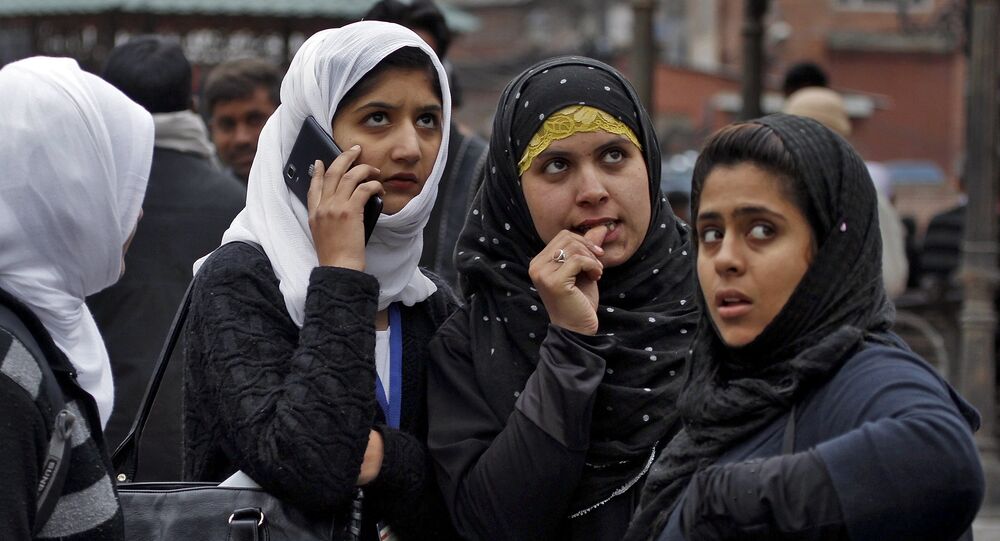 New Delhi (Sputnik): Two Muslim brothers from the Indian state of Bihar have been arrested after marrying Kashmiri girls, motivated by the recent nullification of the special status of Jammu and Kashmir, which has allowed girls to marry anyone outside Kashmir without losing their rights to their ancestral property.

Though the couples claim to have married for love, the family of the two girls, who are sisters, has alleged that their daughters were abducted and compelled to marry.

The latest incident involving Kashmiri girls marrying someone outside the state is the first of its kind following the nullification of the special status of Jammu and Kashmir.  Additionally, some political leaders have made controversial statements regarding marrying Kashmiri girls, evoking public outrage among various social groups who consider their words insensitive.

The brothers - Mohammed Tabrez, 26, and, Mohammed Parwez, 24, were arrested at home in Bihar’s Supaul district and charged with abducting the two Kashmiri women.

It occurred after the girls’ father complained about the brothers, who had worked as masons in Kashmir’s Ramban district for four years.

The two Kashmiri sisters, who were living with Tabrez and Parwez, were taken from their home. A statement was recorded at the local court in the presence of Kashmir police and Bihar police.

Both the Kashmiri sisters, however, denied being abducted by the two men from Bihar, claiming to have consented to marry. They confessed their love and urged the court to allow them to stay with their husbands.

“The annulment of Article 370 came as the most opportune moment for us as we learnt that anyone could marry a Kashmiri girl and settle in Kashmir. Soon all four of us solemnised our nikah (marriage) as per Muslim (Islamic) rules in Kashmir,” Tabrez Ahmed was quoted saying by the Hindustan Times, an Indian daily.

“We waited for three years to realise our weddings dreams. We are adults and happy with our husbands, who love us,” the girls were quoted saying to the magistrate in their statement.

According to the girls’ family, the two men fell in love with the girls while working as migrant labourers in the valley. The couples hatched their marriage plans soon after the government announced its decision to rescind Article 370.

“The matter is in court now. We are bound by the law and hence have to produce them in the Kashmir court, which will decide the fate of the two couples,” the Kashmir police officer said.

The girls have been sent back to Kashmir and the accused men have been booked on  charges of kidnapping and inducing women for marriage.

The Indian parliament revoked special status of  Jammu and Kashmir on 5 August and divided the state into federally administered Jammu and Kashmir, and Ladakh. Among other provisions, the elimination of the special status is expected to safeguard Kashmiri girls' right to marry anyone outside their state without losing their right to own property in Kashmir.