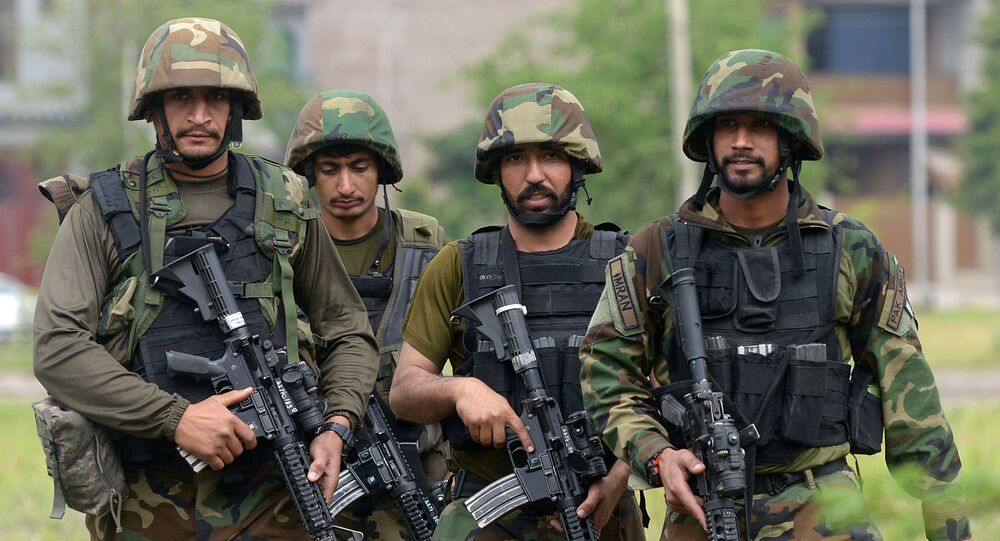 Tensions have recently escalated leading to several exchanges of fire along the Line of Control separating the two states. India’s defence minister has said that the country's nuclear policy of "no first use" may be altered. In the wake of this statement Pakistan slammed New Delhi for what it deemed irresponsible behaviour.

Pakistan Armed Forces' spokesman Asif Ghafoor has said in a statement following a meeting of the country's security council that Islamabad will "respond at its fullest" to any aggressive actions by India.

"If the eastern neighbours feel like testing our resolve then they are most welcome but they must not forget 27th February and our response back then", Ghafoor said.

The spokesman further criticised earlier statements by India’s Defence Minister Rajnath Singh regarding the possible change in the country's nuclear posture, arguing that "responsible states" wouldn't talk in such a manner about using its nuclear armaments. Ghafoor also stated that Kashmir "is definitely a nuclear flashpoint" calling on the entire international community to keep that in mind.

At the same time, Pakistani Foreign Minister Shah Mahmood Qureshi has revealed the country's plan to establish a special "Kashmir cell" in the Ministry of Foreign Affairs and appoint special persons to key diplomatic missions worldwide in a bid to focus other nations' attention towards alleged Indian violations in the Jammu and Kashmir region.

Indian Defence Minister Rajnath Singh stated on 16 August that although New Delhi has been adhering to the "no first use" posture with regard to nuclear weapons, it may change under the influence of "the circumstances". He didn't elaborate on what these circumstances may be.

Tensions between Pakistan and India escalated in July leading to several exchanges of fire along the Line of Control (LoC) – a barrier that separates the two countries' forces in Jammu and Kashmir, a disputed region for which they fought several wars in the past. Following the clashes on the LoC, the two state's bilateral relations further worsened after New Delhi revoked Article 370 of its Constitution that gave Indian-administered Kashmir special status.

India also passed legislation, separating Jammu and Kashmir into two federal entities, giving only one of them a legislative body. Islamabad branded Delhi's actions as illegitimate and in violation of its international obligations, with Pakistan subsequently ceasing all trade, suspending all transport routes with India and downgrading the level of diplomatic ties; expelling the Indian ambassador and refusing to send its own ambassador to Delhi. Islamabad has noted that these steps may be rescinded if India stops its alleged illegal actions in Kashmir and reinstates Article 370.