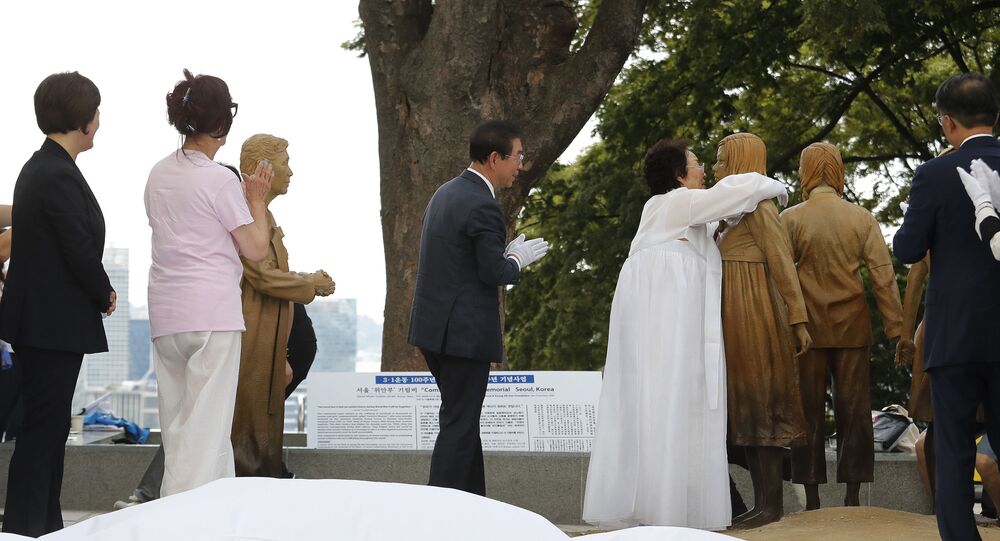 MOSCOW (Sputnik) - A ceremony commemorating Korean women who were kept as sex slaves by the Japanese army during World War II is being held in South Korea on Wednesday, officially International Memorial Day for "Comfort Women," amid ongoing trade tensions with Japan, local media reported.

About 300 people, including survivors of these wartime sex crimes, came to the Kim Koo Museum and Library in downtown Seoul to attend the national ceremony led by the government, according to the Yonhap news agency.

© AP Photo / Ahn Young-joon
Lee Yong-soo who was forced to serve for the Japanese troops as a sex slave during World War II, touches the face of a statue of a girl symbolising the issue of wartime "comfort women" during its unveiling ceremony in Seoul, South Korea, Wednesday, Aug. 14, 2019.

In the course of World War II, when the Korean Peninsula was under Japanese rule, about 200,000 women were forced into slavery in military brothels, according to historians.

​This is the second year Seoul is hosting this event, which falls on the date former comfort woman Kim Hak-sun first publicly testified against Japan in 1991 about an organised wartime military brothel program.

According to the minister of gender equality and family, Jin Sun-mee, the government is planning to expand the issue of comfort women to a women's rights movement.

​The ceremony is receiving more attention this year in light of the Seoul-Tokyo trade conflict, which worsened after Japan removed South Korea from its export list of trusted partners, followed by a similar measure by its neighbour.

Relations between Japan and South Korea soured when the latter’s top court ruled earlier this year that a number of Japanese companies could be sued for their use of forced labour during World War II. Tokyo views South Korea’s claims as unfounded, recalling that Japan paid $500 million to Seoul in 1965 to establish diplomatic relations and finally close the issue of compensation.