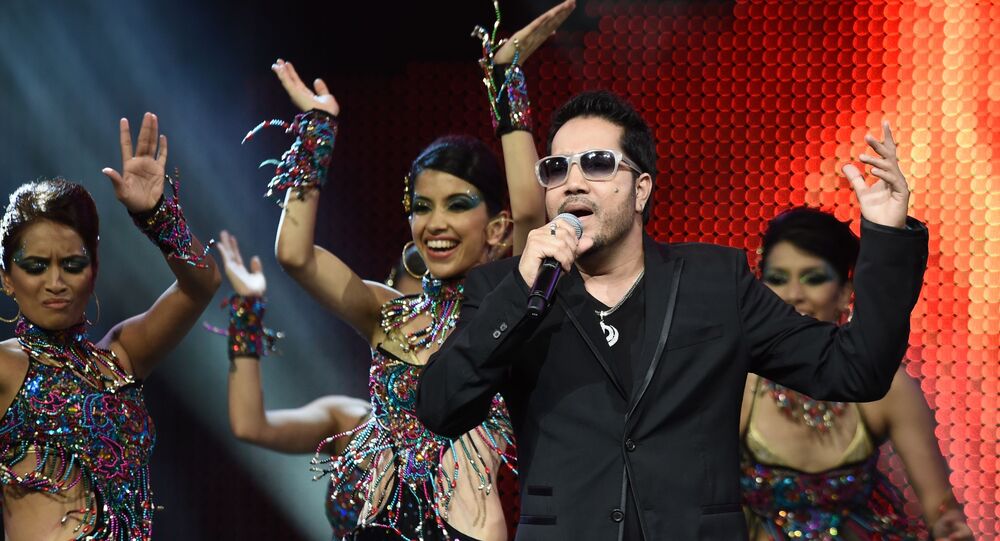 New Delhi (Sputnik): Bollywood singer Mika Singh has invited the wrath of netizens after videos of him performing at a Pakistani billionaire’s function went viral on social media.

Twitterati from both India and Pakistan have slammed the singer for performing at the pre-wedding function amid tense India-Pakistan relations.

In the wake of the Indian government’s decision to revoke Jammu and Kashmir’s 70-year special status and split the state into two union territories, the Pakistani government downgraded its diplomatic ties and cultural exchanges with India.

Singer Mika Singh was invited by a Pakistan-based billionaire, apparently the cousin of former Pakistani President Pervez Musharraf, for his daughter's pre-wedding function on 8 August along with his group.

As reported by a Pakistani news website, the bridegroom is an ardent fan of Singh. To please the son-in-law, the bride’s family obtained a high-level security visa clearance to ensure the special performance by the singer. Singh reportedly charged $150,000 for his performance.

Happy that Indian singer Mika Singh performed at the mehndi of Gen Musharraf's relative recently in Karachi. God for bid if it was Nawaz Sharif's relative it would be raining ghadari k hashtag already. pic.twitter.com/IVfE5hETiz

However, Singh entertaining a Pakistani audience seemed to have stirred up the hornet’s nest on social media.

Indian Twitterati slammed the singer, calling him a “traitor” to the country after Pakistan banned entertainment content coming to the country from India.

A traitor may not have been spotted in Pak; but u've brought one to the notice of Indian Tweeple, now! 🤣

#mikasingh
how can mika humiliate the sacrifices of Indian army? No wonder bhai bwood always shows loyalty for them.

People like him can sell everyone for Money. Setting good example and this particular guy will say Bharat Mata ki Jai on Independence Day. Shame on him. #MikaSingh

this is the truth about Indian sinhers amd actors...they dont care about the nation as long as money is coming in their already over flowing coffers...I mean how come their heart allows them to go to pak...

​One anguished Twitter user suggested that Singh should stay in Pakistan while urging the Indian government to revoke his citizenship.

Pakistani Twitterati seemed equally furious. They questioned why the Indian singer and his group had been invited at all and allotted a visa to perform in their country.

@ImranKhanPTI @SHABAZGIL @ShkhRasheed @fawadchaudhry A moment for the government to drown itself in shame, stupid, unacceptable and moronic behavior on #Kashmir issue, why allowed the Indian singer when you were advocating to cut off cultural ties? Because it was Army's wish?

Kins of Army are enjoying along with Indian Singer Mika Singh in DHA, Karachi, on revoking of #370 in #Kashmir. I thought trade with India & Indian Films are suspended in #Pakistan. Now Kashmiris have to see this hypocrisy of #PakistanArmy. https://t.co/IZnJKcI4WE

Meanwhile, #Pakistan’s duplicity to cut cultural ties with #India was exposed as it granted one month visa to #Bollywood singer #MikaSingh and his team to perform in the wedding of #Musharraf’s influential cousin Adnan Assad. pic.twitter.com/RNfn8K2zXD

A section of sarcastic Twitter users said it looks as if the Pakistani government is "celebrating" India’s decision to scrap Article 370 by inviting Singh to perform.

#Pakistan celebrating with #mikasingh on the occasion of scrapping article 370. Weldone #Pakistanis#KashmirLooksAheadhttps://t.co/ulB3PqtIDQ

It's a great gesture from former Pakistani Present in the support of #Article370Scrapped by inviting #MikaSingh to perform at his family event on 9th August. The singer brought back whopping $150,000 in India.

​Mika Singh has given several chartbuster hit songs to Bollywood. Amongst a wide catalogue of his songs, the most prominent are "Bas Ek King" (Singh Is King), "Mauja Hi Mauja" (Jab We Met), "Ibn-e-Batuta" (Ishqiya), and "Dhanno" (Housefull).