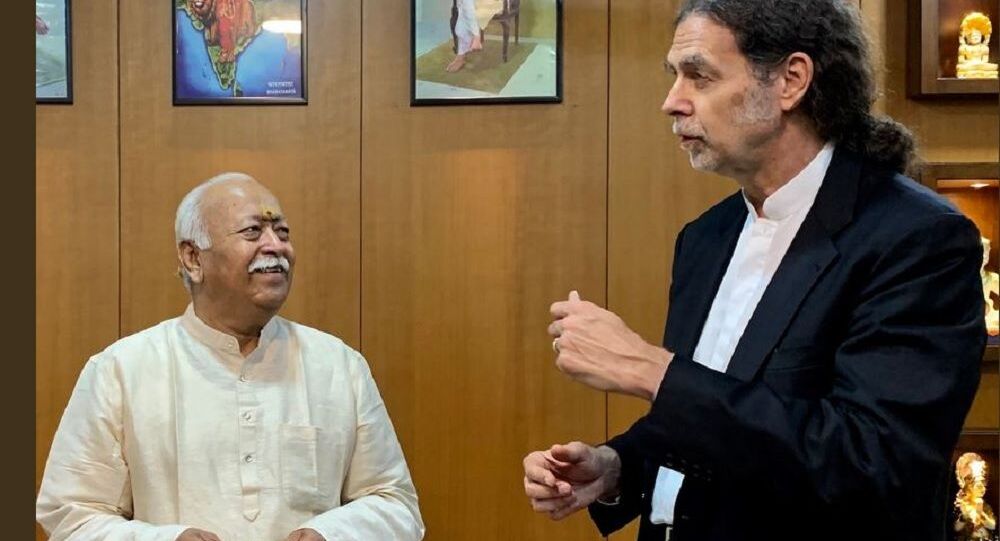 Activists have accused the RSS of inciting hatred against non-Hindus and seeking a purely Hindu state. The group positions itself as a cultural organisation but not a political one.

Germany’s Ambassador to India, Walter J. Lindner is facing calls to resign after visiting the headquarters of Rashtriya Swayamsevak Sangh (RSS), a nationalist group with long-standing ties to the governing Bharatiya Janata Party.

With roughly six million active members, the RSS is the largest volunteer group and NGO in the world. Indian Prime Minister Narendra Modi had previously worked for the group, which is credited with a rise in voter turnout and his party’s win in the 2019 general election.

The RSS defines its main goal as nourishing Hindu culture through a network of thousands of theological schools across India, but some human rights groups have accused the organisation of spreading hatred against non-Hindu Indians and staging pogroms.

The German envoy met with RSS chief, Mohan Bhagwat. In September 2018, Bhagwat gave a keynote speech at the World Hindu Congress in Chicago, but the event was disrupted by a group of protesters who claimed that the RSS was promoting Hindu supremacy.

Visit of Headquarters of RSS (Rashtriya Swayamsevak Sangh) in Nagpur and long meeting with its Sarsanghchalak (Chief) Dr Mohan Bhagwat. Founded 1925, it is world’s largest voluntary organisation - though not uncontroversially perceived throughout its history... pic.twitter.com/B5cFUpw1ml

Several US politicians who were set to attend, including Hawaii Rep. Tulsi Gabbard, have dropped out of the event in the wake of the backlash.

Pieter Friedrich, an author and South Asian affairs analyst, was among the protesters. He has now launched a petition demanding that Ambassador Lindner resign. If he fails to do so he should be recalled, Friedrich insists, urging German Chancellor Angela Merkel and Foreign Minister Heiko Maas to intervene.

“His visit condones the RSS paramilitary as well as its ideological and institutional inspiration by European fascist movements like those of Hitler's Germany and Mussolini's Italy,” reads the petition, which has racked up over 2,000 signatures so far.

During the visit, Lindner was photographed speaking to Bhagwat with the picture of Madhav Sadashiv Golwalkar, the RSS leader between 1940 and 1973, visible in the background.

Friedrich argued that Golwalkar “wrote glowingly in support of Nazi racial policy” and modelled his ideas of racial consciousness on those of the Nazis.

The Organisation for Minorities of India (OFMI) has mirrored Friedrich’s complaints. “Being pictured with Nazi apologist Golwalkar, the Guru of Hate, sends a chilling message to India’s minorities,” said an OFMI spokesperson. “Ambassador Lindner legitimises fascist ideology, including that of the defeated Nazi regime, by engaging with the RSS on any level other than the harshest censure.”

“Ambassador Lindner should be stripped of his position,” the spokesperson added. “We call on Chancellor Angela Merkel and Foreign Minister Heiko Maas to intervene without delay, issue an apology, and reaffirm Germany’s opposition to fascism wherever it is found in the world.”

But the envoy, who took over in May, defended himself and described the RSS as part of India’s “mosaic”.

“I went to educate myself about the organisation,” he explained in an interview with The Hindu newspaper. “I had read very negative and very positive articles about it, everything from its social engagement to accusations of fascism, and I wanted to make my own impression. So I asked Mr. Bhagwat many questions.”

Lindner said he was aware that the RSS had drawn some inspiration from Nazi rhetoric in the 1930s-40s, and had discussed this with Mohan Bhagwat.

“I asked many questions on radicalism, and there are no simple answers to these questions,” he said. “The [RSS] is one part of the mosaic that makes up India. You can’t deny that this is a mass movement and whether one likes it or not, it is out there.”