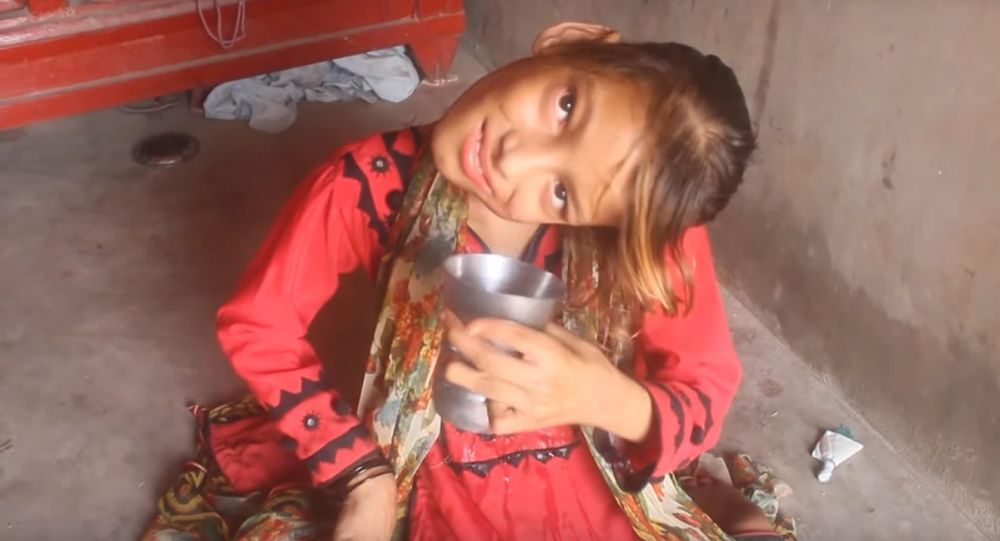 New Delhi (Sputnik): A Pakistani girl suffering from a rare health condition since childhood requires a major surgery for which her family is seeking the government’s help.

The family has been waiting for a politician who abandoned them after pledging his help last year.

Afsheen Kunbhar, the 11-year-old girl from Mithi area in Pakistan’s Sindh Province, has a particular medical condition, in which her head is at a 90-degree angle since childhood.

According to local medical practitioners, she suffers from a muscular disorder known as “torticollis” which is responsible for the improper positions of her head and neck.

The condition has made it a struggle to perform daily tasks like eating, sleeping, and even walking.

The illness started when she was just eight months old after she fell while playing with her siblings.

Afsheen’s parents initially ignored the bend in her neck, which gradually worsened.

The girl stays at home with her widowed mother Jameelan Kunbhar, who takes care of her and six other siblings alone, after her husband died of cancer last year.

Every day the mother struggles to make ends meet and barely earns anything as a domestic labourer.

The poverty-stricken family is unable to pay for the surgery to help Afsheen, who is in constant pain.

In 2018, a politician took Afsheen to Agha Khan University Hospital in Karachi, for possible surgery. It was then delayed due to a family wedding, after which the sponsor never returned and stopped answering phone calls.

Her eldest brother Mohammad Yaqoob Kunbhar, 27, said, “The doctors at the Agha Khan Hospital, in Karachi, Pakistan, performed all the tests. They told us there is a 50 per cent chance of a successful surgery."

“However, after a month, the politician who promised to sponsor the surgery never responded to my repeated calls. We don’t have money to take Afsheen to the hospital on our own. In the last year, she has just stayed at home, and hasn’t seen a doctor ever since,” he said.

Kunbhar, who left a job repairing mobile phones to care for his ailing sister, is now urging the Pakistan government to help with her medical treatment as she is suffering.

“She needs to be taken to a foreign country. I am pleading with the government and locals here to please help my sister. She needs surgery to live a normal life,” the girl’s brother said to Sputnik.