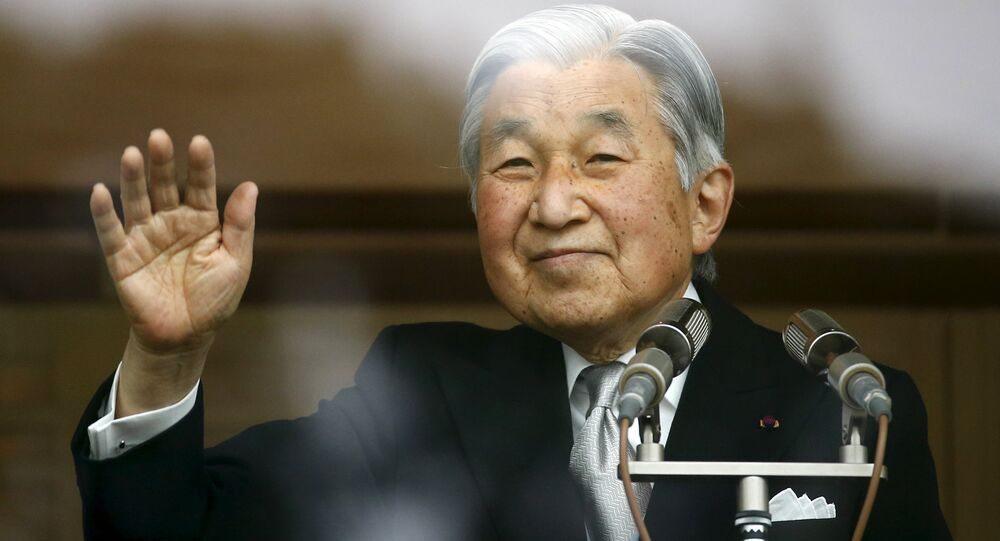 TOKYO (Sputnik) - Japan's outgoing Emperor Akihito has officially stepped down at the abdication ceremony at the Imperial Palace in Tokyo.

On Wednesday, Crown Prince Naruhito will ascend the throne as Japan's 126th emperor.

In Japan's case, the beginning of a new era that will follow the ascension of Crown Prince Naruhito is not just a figure of speech. The Asian country has its own calendar system used along with Gregorian calendar — the start of the reign of each Japanese monarch marks a new era, with its name being motto for the emperor's rule. Akihito's three-decade rule, which will end on Tuesday, went by the name "Heisei", which can be interpreted "peace everywhere." The era name also becomes the monarch's posthumous name.

© AFP 2020 / TOSHIFUMI KITAMURA
As Japanese Emperor Prepares to Hand Over Throne, What's Next for the 'Lost Generation'?
The Japanese government has unveiled that the new imperial era, which will begin on May 1 with the ascension of Crown Prince Naruhito, will be named "Reiwa." The Chinese characters that make up the name of the era can be translated as "order" and "harmony," or "peace."

Since the adoption of the post-war constitution in 1946, the emperor plays a symbolic rather than a political role in Japan, and the succession of the emperor and the change of era would also be of symbolic nature, Dr Peter Cave, a senior lecturer in Japanese Studies at the University of Manchester, told Sputnik.

"It is a symbolic change, which provides a convenient way of dividing up time. It also has a practical aspect in that the regnal year is often used in daily life, on forms etc. (e.g. 2018 was also Heisei 30). 2019 is unusual as until the end of April it is Heisei 31, but from 1 May it will be Reiwa 1," Cave said.

Takako Amano, a senior lecturer at the University of Central Lancashire, pointed out the importance played by the retiring imperial couple as the nation's symbols.

"He has made a lot of effort to fulfil his role always with his wife by visiting almost all prefectures of Japan, areas where it was affected by natural disasters and softened the wounds of ex-soldiers because of WWI and WWII abroad," Amano said.

© AFP 2020 / TOSHIFUMI KITAMURA
Japan to Celebrate Naruhito's Accession to Emperor’s Throne in 2019 - Reports
She noted that Akihito and Michiko won hearts of many Japanese people not only with being financially humble and prudent in their actions, but also with moving and tender attitude to each other.

The couple has recently celebrated the 60 years of their marriage, which once shook Japan as Michiko became the first commoner to marry a member of the Japanese imperial family.

"They have demonstrated strong attachments to each other: Michiko’s strong support for Akihito has been witnessed every now and then in public. They have been truly loved and respected by the majority of the Japanese," Amano said.

US President Donald Trump will become the first leader to make a state visit to Japan in the new era. Trump and his wife Melania will meet with their majesties the Emperor and the Empress and have dinner afterward.

"Hosting President Trump and the First Lady as first state guests in the Reiwa era symbolizes the unwavering bond of the Japan-US alliance. I hope this visit will further strengthen the Japan-US global partnership that contributes to peace and prosperity in the region and the world," Chief Cabinet Secretary Yoshihide Suga told a briefing in mid-April.

After reporting his abdication to the sun goddess Amaterasu, a major deity in the Shinto religion, and ancestral spirits of the imperial family in private ceremonies at the palace's sanctuaries, Akihito will walk into a state hall where he would deliver his final remarks as emperor and receive audience with representatives of the people, including Prime Minister Abe, for the last time.

© REUTERS / Thomas Peter
Japanese Gov't to Submit Draft Law in May on Emperor Akihito's Abdication
The new emperor's ascension to the Chrysanthemum Throne will take place next morning at 10:30 a.m. in the same room. He will inherit the two of the sacred imperial regalia — a sword and a jewel — and state and privy seals in a sacred ceremony dating back thousands of years. It is believed that the regalia, also referred to Three Sacred Treasures of Japan, were handed over by the sun goddess Amaterasu to her grandson Ninigi-no-Mikoto, whom she sent down to earth to bring peace to Japan. Legends say that Ninigi-no-Mikoto was the great-grandfather of Japan's first emperor Jimmu, and the use of the regalia in the ascension ceremonies therefore signifies that emperors are descendants of the goodness.

The upcoming transfer of the throne will be exceptional due to the presence of a woman, Satsuki Katayama, the only female minister in Abe's cabinet, who handles regional revitalization and female empowerment, at the ascension ceremony, which is usually off-limits to women. The exception, however, will not be extended even to Naruhito's wife and incoming empress Masako.

After the ascension, the new emperor will have his first audience at 11:10 a.m. with representatives of legislative, judiciary and executive branches in the Imperial Palace.

© CC0
Japan Commemorations for New Emperor, 2020 Olympics to Drive World Gold Price
Naruhito will then make his first public appearance as emperor on Thursday, with thousands of people expected to flock to the Imperial Palace grounds. The Kyodo News reported that several thousand police officers would ensure security at the upcoming ceremonies and celebrations.

The official enthronement of the new emperor, however, will take place in October in a series of ceremonies, including a procession by motorcar and court banquets. The main ceremony will take place on October 22 and is expected to be witnessed by thousands of guest and foreign delegations.

Japan's annual spring holidays dubbed the Golden Week were unprecedentedly extended to 10 days to celebrate the ascension of the new emperor, causing a significant rise in tourism. According to the JTB travel agency, some 24.67 million Japanese citizens are planning to use the long holidays for trips, with number of both domestic (24.01 million) and overseas (0.662 million) travellers setting an all-time record.

"With the new name incorporating a nuance of 'creating and nurturing culture by bringing hearts and minds together,' people's expectations for the dawning of a new era are growing, and there is a feeling of anticipation and welcome in society, in contrast to the mood of self-constraint that sometimes characterized the current Heisei era," the agency said in its press release.

The forthcoming abdication has drawn once again attention to the debate around the Japanese royal family’s hereditary male-only succession rules.

The Japanese government considered changes to the 1947 Imperial Household Law, which does not allow women to ascend the throne, back in the 2000s when there was no male heir born to the imperial family for almost 40 years. Crown Prince Naruhito has only one daughter, Princess Aiko, while his younger brother Prince Akishino, second in the line to the throne, had only two daughters.

© REUTERS / Kyodo
Japan’s Princess Ayako Forfeited Royal Status to Marry Commoner (VIDEO)
The dynasty crisis was postponed by the birth of Prince Hisahito to Akishino's family in 2006. Nevertheless, as the 126th emperor of Japan is preparing to ascend to the Chrysanthemum Throne, there are still concerns that the centuries-old succession may be threatened if 12-year-old Hisahito has no male heirs.

One of the conservatives' main arguments against a woman ascending the throne, according to Cave, is that only a man can perform certain Shinto rituals. However, the Japanese history knows the examples of female monarchs, with the last being Empress Go-Sakuramachi, who reigned from 1762 to 1771, but then abdicated in favour of her nephew.

"As the new emperor's younger brother does have a son, and there is thus a male heir for the throne, there seems no current prospect of a change in legislation unless there is a very dramatic change of view within Japanese society on the issue," Cave noted.

The expert noted, however, that there was currently no sign of such a change.

Amano agreed that immediate changes were unlikely, noting that she was surprised by how discussions of allowing Princess Aiko ascend the throne ended once the news broke that Akishino's wife was expecting a boy back in the 2000s. She noted, however, that changes to the succession rules were still possible in the long run.

"Although on the surface it looks as if they are not, such discussion has been definitely continuing behind the scene because Emperors have not had concubines since Taisho era (1921－1926) and no extended families have been allowed to take the throne since the end of WWII, so as is, realistically Japan won't be able to continue producing male Emperor for long," Amano explained.

Emperor Akihito announced in 2016 that he intended to step down, citing his age and physical inability to perform his duties. After the abdication, Akihito and his wife Michiko, who have been hosting hundreds of events and extensively traveling over the past three decades, are expected not to be involved in ceremonial duties and will peacefully retire at the Togu Palace in Tokyo.