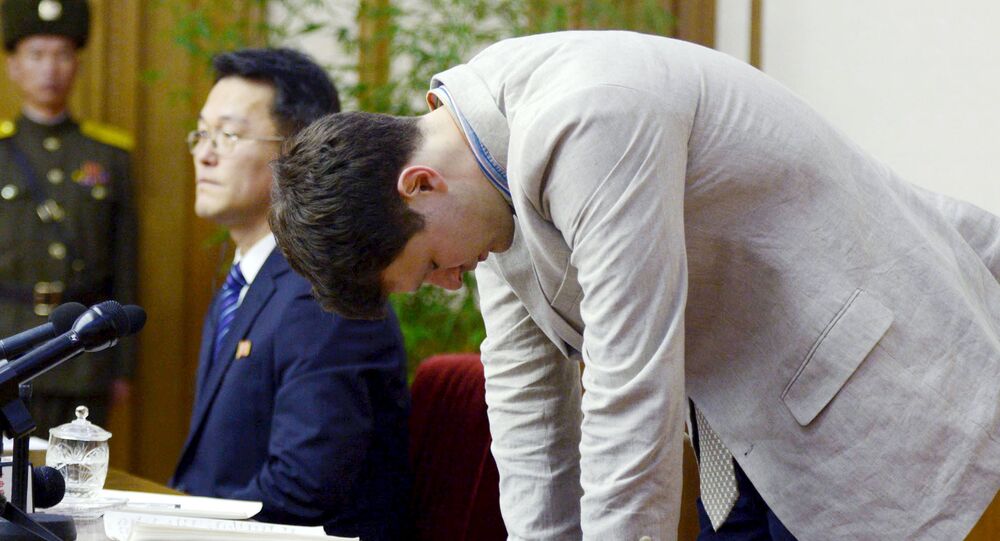 Pyongyang sent Washington a $2 million hospital bill for American tourist Otto Warmbier in 2017 shortly before returning him to the US, where he arrived comatose and died shortly thereafter, according to a report by the Washington Post. The White House has previously claimed it paid “nothing” to get “hostages” out of North Korea.

The Post reported Thursday that two officials familiar with the situation said the Democratic People's Republic of Korea (DPRK) presented the US Treasury with the bill two years ago before it would return Warmbier, who had fallen into a coma while in North Korean custody.

However, while the bill wasn't paid in 2017, it's unclear if it has been since. The White House only told the Post, "We do not comment on hostage negotiations, which is why they have been so successful during this administration."

Warmbier, who was sentenced in March 2016 to 15 years in prison with hard labor for theft during a trip to the DPRK earlier in the year, was returned to his parents in the US in June 2017. When he died, the University of Virginia student was 21 years old.

Fred Warmbier, Otto's father, told the Post it sounded like a "ransom" was paid for his son.

The Warmbiers, along with US President Donald Trump, claim Otto was tortured to death. North Korean officials maintain that he was never tortured and a US coroner's report found that his cause of death was complications resulting from a lack of blood flow to the brain following a year-old injury. Pyongyang says his coma was induced by complications of botulism, a bacterial infection commonly caused by improper food handling, and a bad reaction to a sleeping pill.

Joseph Yun, former US special representative for North Korea policy, and Michael Flueckiger, an emergency medicine doctor, traveled to Pyongyang in June 2017 after receiving news of Warmbier's condition. Flueckiger told the Post it was "evident" Warmbier had received "really good care" at the hands of the North Koreans, noting he had received "state-of-the-art resuscitation" and that he didn't even have bed sores.

However, Flueckiger said it required a lot of negotiation to get Warmbier back to the US.

"I didn't realize what a negotiation it was going to be to secure his release," Flueckiger said. "Would I have lied to get him out of there? Maybe I would have… But I didn't have to answer that question."

It was Yun who was presented with the $2 million bill, and at then-Secretary of State Rex Tillerson's direction, he agreed the US would pay.

Trump caught flak in March for saying he believed North Korean leader Kim Jong Un, who told him at a February peace summit in Hanoi, Vietnam, that he didn't know about Warmbier's mistreatment.

"Of course I hold North Korea responsible for Otto's mistreatment and death," Trump said, noting, "Remember, I got Otto out along with three others."

In December 2018, US District Court Chief Judge Beryl Howell ruled the DPRK was "liable for the torture, hostage taking, and extrajudicial killing of Otto Warmbier, and the injuries to his mother and father, Fred and Cindy Warmbier," to the tune of $500 million, Sputnik reported.