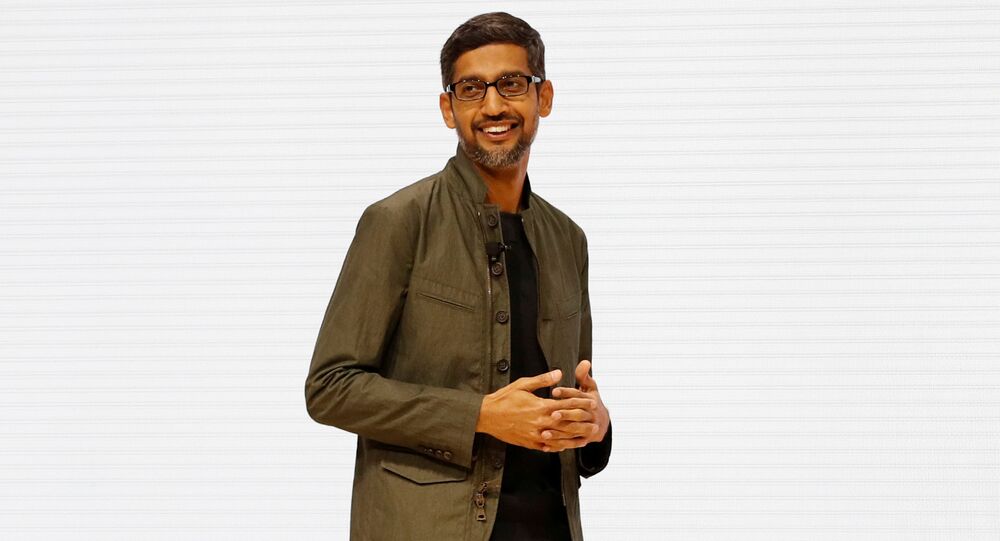 An old picture of Google CEO Sundar Pichai visiting his alma mater, the IIT Kharagpur in the Indian state of West Bengal, in January 2017, to speak about India's startups and the digital economy, has caused a stir on social media when someone termed it as Pichai participating in the ongoing Indian elections.

New Delhi (Sputnik): As voting began in India's 17th General Elections more than a fortnight ago, a curious bit of information went viral on Twitter suggesting Google CEO Sundar Pichai had voted in the country's parliamentary elections. It, however, turned out to be fake.

What appeared to lend credence to the claim about a week ago was a photo of Pichai surrounded by an admiring crowd.

A Twitter account purportedly representing actors Rajnikanth and Vijay claimed Pichai's casting of his vote in Chennai, the capital city of Tamil Nadu state in India, has gone viral.

The photograph in question started evoking curious responses from the Twitterati.

Prem Parmar, a resident of the western Indian state of Gujarat, asked Pichai whether his brother had accompanied him to the polling station or not?

Jyothsna B Shankar with the twitter handle @jyothsnab sought to know how Pichai, a US citizen, could vote in India?

But #sundarpichai must be a US citizen right? Unless he has a dual citizenship, how can he vote here? https://t.co/XcKShSOFOE

Another person tweeted Pichai, saying he would vote in the US presidential elections rather than India's general elections.

Morons he will vote 4 US presidential elections 2020. His passport changed colour and so did he..ahem 🤗#elections2020 @sundarpichai @GoogleIndia keep ppl out of their misery #sundarpichai #Vote4Change

However, the information later turned out to be false. Sundar Pichai cannot vote in India as he holds American citizenship and according to Indian election regulatory body, The Elction Commission of India, a person who is not a citizen of India cannot be registered in the electoral rolls.

It was, in reality, a picture of Pichai visiting his alma mater, the Indian Institute of Technology (IIT) in Kharagpur in the eastern Indian state of West Bengal in January 2017, where he had addressed over 3,000 students on the future of India's startups and the digital economy.

This is the original tweet from the man himslef after his visit in 2017.

Also got to visit my alma mater (and old dorm room!) for the first time in 23 years. Thanks to everyone @IITKgp for the warm welcome! pic.twitter.com/OUn7mlKGI7