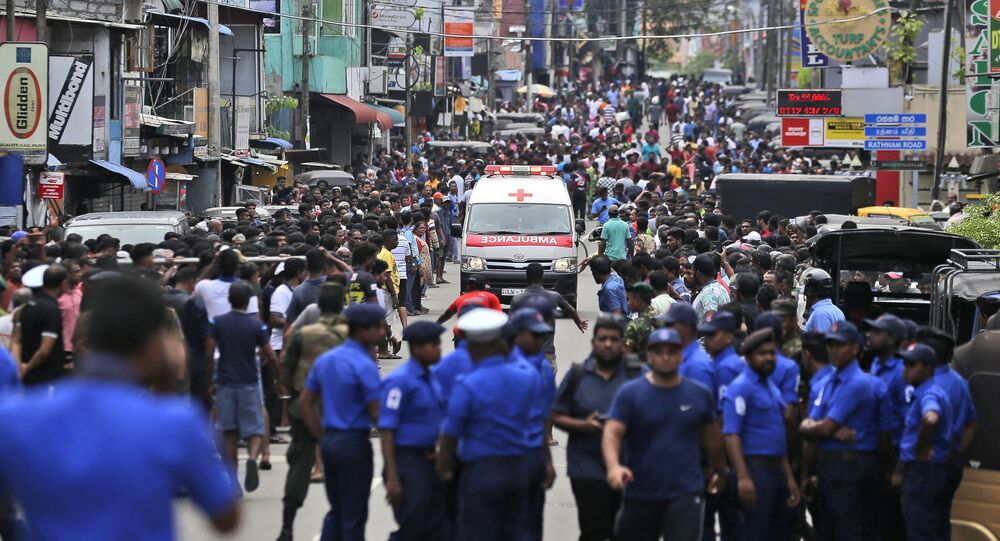 Sri Lankan authorities have detained 24 people in connection with a series of deadly explosions that killed over 200 people earlier on 21 April, the News 1st broadcaster reported.

St. Anthony's Shrine in the Kochchikade district of Colombo and St. Sebastian's Church in Negombo have been hit by the blasts, as well as Zion Church in the eastern city of Batticaloa. Channel News1 TV reported that the death toll has risen to at least 215, while 450 were injured, adding that Easter services in Colombo have been cancelled.

"I have given instructions to take very stern action against the persons who are responsible for this conspiracy", President Maithripala Sirisena said, as quoted by the Sri Lankan Daily Mirror newspaper.

Several expositions reported around the country including Kochchikade Katana and #Batticalo churches and five star hotels in #Colombo #lka pic.twitter.com/jvLUbtS1I2

The death toll later increased to 290 people, according to the police, while the number of injured spiked up to about 500.

Police spokesperson Ruwan Gunasekera said that the injured were being evacuated while security forces have cordoned off the areas to conduct search operations.

No organisation has claimed responsibility for the attack.

According to Al Jazeera, the explosions took place almost simultaneously, with the first one in Colombo, and two others occurring within half an hour.

The source in the police told AP that authorities suspect at least two of the blasts were caused by suicide bombers.

The tweet says it shows the results of the blast at St. Anthony's Shrine in Kochchikade.

"Sec Defence and I am at Kochchikade church. Also was at ShangriLa n Kingsbury. PM is on his way from Bentota. Emergency meeting called in a few minutes. Rescue operations underway", Sri Lankan Minister of Economic Reforms and Public Distribution Harsha De Silva wrote on Twitter, noting that there are foreign citizens among those killed in the blasts. "Please stay calm and indoors", he added.

About 1.2 million or 6 percent of the Sri Lankan population belongs to the Catholic faith, while the country is mainly Buddhist. In 1995, at a ceremony in Colombo, Pope John Paul II beatified early missionary Father Joseph Vaz who is known as the Apostle of Ceylon.