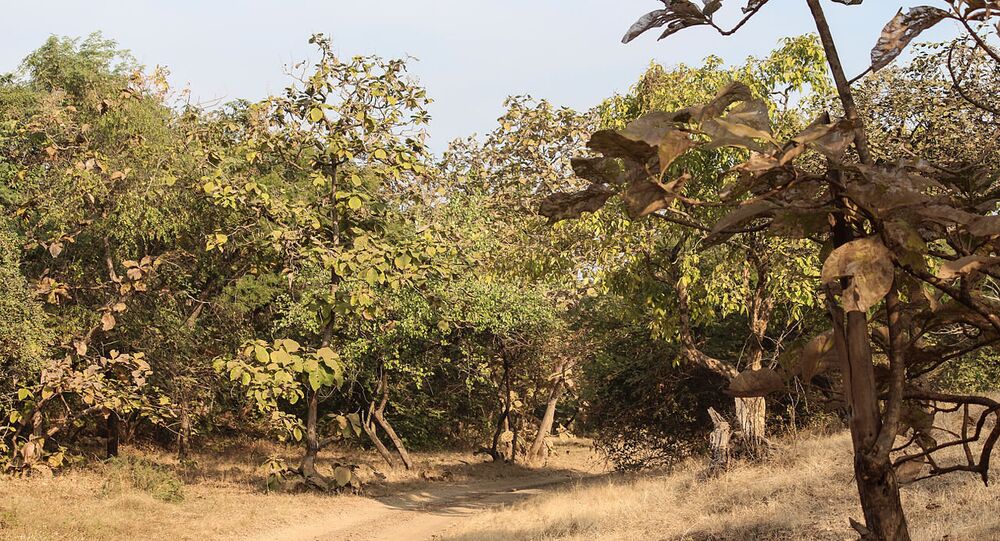 Election machinery in India doesn’t just go ‘the extra mile’. It goes the full distance, some 35 km, for a single voter living an ascetic life in the middle of the jungle. The country has been doing this since 2007 and will do it again on 23 April, when the 3rd phase of the 7-phase polling process takes place.

New Delhi (Sputnik): Every vote counts in India, which has provided a booth for one remotely-located citizen who is eligible to make his voice heard in this year's election. Since the 2007 elections, a lone voting booth has been set up at a remote location in the Gir forests of the Indian state of Gujarat, in an area that serves as one of the sole habitats for endangered Asiatic lions.

The voter is a temple priest named Mahant Bharatdas. He is due to cast his vote once again on 23 April in the ongoing national elections.

Sputnik spoke with the state election officer, V. M. Prajapati, who is overseeing the polling process there. The official praised the grit of Bharatdas, who is now in his mid-sixties has been exercising his right to vote since 2007.

"We have been conducting elections here in Banej in the Gir forest of Gujarat for this ascetic voter since 2007. He has taken part in the national as well as state elections," Prajapati said.

Polling booths in Indian elections get all the attention they require, whether for a single voter or for thousands of voters. At the Banej polling station, the Election Commission has made elaborate arrangements for the temple priest to cast his vote and ensured that the entire poll-station-manning hierarchy is made available for him at the booth.

© AP Photo
India’s Congress Party May Field Priyanka Gandhi Against PM Modi in Varanasi
"We have a presiding officer overseeing the polling station. There are two polling officers on duty during polling time and they are accompanied by a booth-level officer," Prajapati added.

"We travel some 35 kilometres within the jungle to reach the spot where the polling is to take place. We do this under Supreme Court directives which say that a polling station ought to be within 2 kilometres' walking distance from where voters live," he added.

"We use rooms from the forest department as a ballot station," he informed.

The terrain is rough and it is not unusual for one to see wild animals roaming free in the vicinity, including a pride of lions.

"As the polling booth is in a thickly forested area, there is no mobile connection or internet connectivity. We use a wireless connection belonging to the forest department for all our communication needs," explained the election officer.

"Mahant Bharatdas is a prolific voter who votes regularly during national as well as state elections," he said.

Mahant Bharatdas hails from the Indian state of Rajasthan and chose an ascetic life for himself after dropping out of school. He serves as the temple priest at a Hindu temple located within the lion-infested Gir forests.