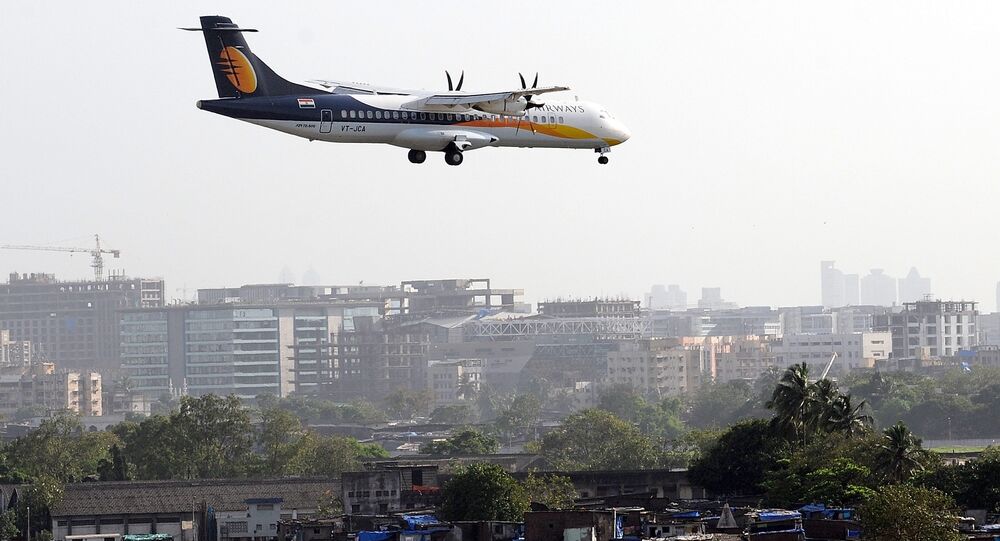 Lenders have acquired a 51 per cent stake by injecting $218 million into the cash-strapped airline. With this, founder Naresh Goyal's position as owner of the airline has been nullified. Goyal has also ceased to be the chairman, with an interim committee of lenders taking over the management.

New Delhi (Sputnik): India's crisis-hit airline Jet Airways has undergone a major shift in ownership with founder and chairman Naresh Goyal and wife Anita Goyal stepping down from the helm, and lenders, including the State Bank of India (SBI), taking over management. The Jet Airways board on Monday took the decision under a debt-resolution plan.

Sources: Jet Airways Chairman Naresh Goyal and his wife Anita Goyal step down from Jet Airways Board due to financial crisis; bank-led board to run the airlines. pic.twitter.com/f3NVDOhFNs

The interim management committee (IMC) will now manage and monitor the daily operations and cash flow of the company until a new strategic investor is found to bail out the airline. In the meantime, lenders have decided to inject approximately $218 million in the form of debt instruments against the security of the airline's assets.

"The INR 15000 million is a fully secured, priority, interim funding for two months which we believe is good enough to normalise operations of the airline before it is sold" SBI Chairman Rajnish Kumar told CNBC-TV18 in an interview.

Coming Up At 5:00 PM: Naresh Goyal exits Jet Airways & we speak to the new man in the cockpit. SBI’s Chairman Rajnish Kumar speaks about Rs 1,500 cr that will be infused to keep the airline afloat as lenders take charge with a 51% stake. #JetAirways #NareshGoyal pic.twitter.com/cKkUjf4tWg

© CC0
Over 300 Pilots of India's Jet Airways Threaten Mass Strike over Salary Delay
In return, lenders are getting a 51 per cent stake, which itself is worth over INR 15000 million, Rajnish added.

Buoyed by the news, the airline's stock jumped 12.69 per cent to close at INR 254.50 on the Bombay Stock Exchange.

The rise in the value of Jet Airways stock happened although the airline made an official announcement about the board's decisions after the markets closed. The response of the market was mostly guided by the speculative news reports doing the rounds since early morning about Goyal's exit.

Jet Airways, operating in India for the last 25 years, has been struggling with financial woes and looking for a fresh infusion of funds. Due to the financial crunch, the airline has suspended operations on at least 14 international routes till the end of April and over 80 planes have been grounded. The majority of the aircraft were grounded due to the non-payment of lease rentals.