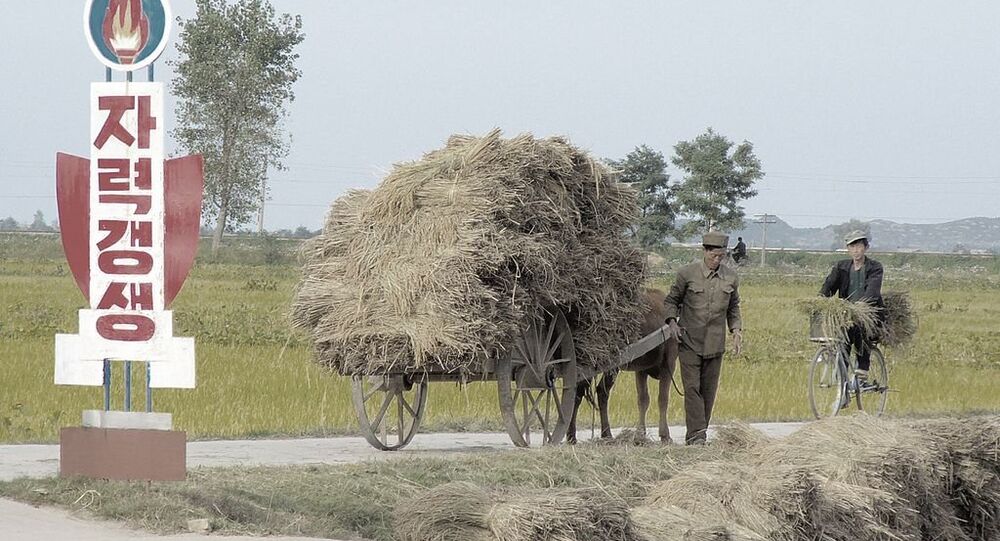 A new report from the United Nations office in North Korea found that while roughly 43 percent of the population is not properly nourished, humanitarian organizations in the country lack funding to reach people who need food and water aid, which includes local infrastructure investment. The report follows a plea from Pyongyang for aid.

The Wednesday plea by Tapan Mishra, the UN's resident coordinator in the Democratic People's Republic of Korea (DPRK), was not the first made on behalf of undernourished people in the small, mountainous socialist country wedged between Russia, China and South Korea. Mishra noted that an estimated 11 million people, or 43 percent of the country's population, do not receive proper daily nutrition, and he made a desperate plea for additional aid.

While the number of undernourished people in DPRK has declined in recent years, a series of natural disasters has set the country back by 1.4 million tons in expected harvests this year, and now the UN mission needs roughly $120 million "to urgently provide life-saving aid to 3.8 million people," UN spokesperson Stephane Dujarric told reporters Wednesday.

"There is a food gap of about 1.4 million tons expected for 2019, and that's crops including rice, wheat, potato and soybeans," Dujarric said, citing figures provided by Pyongyang.

A letter to the UN delivered by North Korean diplomats late last month supplied that number, noting that if "international organizations" don't "urgently respond to addressing the food situation," they'll be forced to cut individual food rations from 550 grams to 300 grams per day, Sputnik reported.

Another UN report last month, by the Food and Agriculture Organization, came to similar conclusions, stating that "chronic food insecurity and malnutrition" had been exacerbated thanks to "not only natural disasters, but also shortages of arable land, lack of access to modern agricultural equipment and fertilizers."

Some of the problems mentioned in Mishra's report included a severe heat wave in provinces considered to be the country's "food basket" and the extensive damage caused by Typhoon Soulik, a powerful hurricane that struck the country in August, killing 83 people and displacing 65,000, according to NK News.

Mishra said humanitarian operations by the UN form a "critical lifeline for millions of people," with a priority on women, children, the elderly and people with disabilities, noting that 90 percent of nutrition assistance and 92 percent of medical assistance goes to children under five and to women.

Dujarric noted last month that in 2018 the UN only received one quarter of $111 million it requested for aid programs in DPRK. Because of this shortage, 1.4 million people didn't get food assistance, 800,000 people couldn't get essential health services provided by the mission, and an estimated 190,000 kindergarteners and 85,000 acutely malnourished children didn't get the nutrition support they needed, Wednesday's report shows.

However, Mishra noted that UN and international nongovernmental organizations (INGOs) still reached 2 million in DPRK with their aid last year, and that since 2012, chronic undernutrition amongst children under five has fallen from 28 percent to 19 percent.

"Although Security Council sanctions clearly exempt humanitarian activities, life-saving programs continue to face serious challenges and delays," Mishra lamented on Wednesday. "While unintended consequences of sanctions persist, these delays have a real and tangible impact on the aid that we are able to provide to people who desperately need it. We must collectively fulfil our commitment under the Sustainable Development Goals to ‘leave no one behind.'"

Among the problems with accessing necessities on its own, Mishra noted the DPRK's banking channel, "used to bring funds into the country to pay day-to-day operational costs, has been suspended since September 2017. Attempts to find a replacement channel have so far been unsuccessful."

These harsh restrictions can strangle the country's access to "legal" resources in other ways, too. For example, a paper published last December by the Middlebury Institute of International Studies at Monterey looked at scientific projects in which North Korean scientists had partnered with scholars from other countries, noting that roughly 100 of the 1,300 they examined had "identifiable significance for dual-use technology, weapons of mass destruction (WMD) or other military purposes."