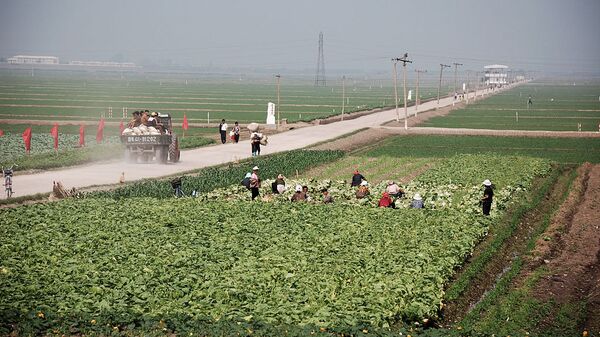 A note to the United Nations by North Korean diplomats warns of significant food shortages in the isolated country, which has experienced extreme weather on top of extensive US and UN sanctions that strangle trade. The news comes only a week before North Korean and US leaders will meet in Hanoi, Vietnam, for a second peace summit.

An undated, two-page memo by the North Korean mission to the United Nations viewed by Reuters Thursday says the Democratic People's Republic of Korea (DPRK) produced half a million tons less food in 2018 than it did in 2017 and warns of an expected 1.4 million ton shortage in 2019 that could see rations nearly halve in the country. In the nation of roughly 25.5 million, the UN estimates that 10.4 million people are undernourished in some ways.

"The DPRK government calls on international organizations to urgently respond to addressing the food situation," the memo says, according to Reuters, noting that daily individual rations will have to be cut from 550 grams to 300 grams if the country doesn't get help.

The help Pyongyang seeks is twofold: on the one hand, it requires shipments of food to fill the gap, but it also seeks further alleviation of the trade sanctions stifling its ability to buy and sell products with other countries.

The two sides and their allies fought a brutal war from 1950 to 1953 in which over 2.5 million Koreans and another half million Chinese and Americans were killed. The war solved nothing, and the two sides have never formally signed a peace treaty, instead establishing a demilitarized zone between the two Koreas, with the North turning itself into a defense-centered garrison state and the South becoming the permanent home to the US Eighth Army and Seventh Air Force, which in 2019 number roughly 27,000 troops.

Pyongyang's claims of a food shortage are supported by the UN Food and Agriculture Organization's (FAO) report on the country, released last week.

The report notes "chronic food insecurity and malnutrition" in the country and projects a similar estimate to Pyongyang's, of roughly 1 million tons' shortage in food production, noting this is "due to not only natural disasters but also shortages of arable land, lack of access to modern agricultural equipment and fertilizers."

"Due to these impacts, food insecurity is expected to increase, particularly among the most vulnerable," who are additionally victims of "unrelenting gaps in nutritional status between rural and urban populations," according to the report.

The socialist country has been "severely affected over the past six years by natural disasters," the report said, noting that floods and drought have harmed "farmers' coping capacities."

Indeed, the most notorious famine in DPRK's history, the 1994 to 1998 period known in the country as the Arduous March, was precipitated by a similar perfect storm of natural disasters and strangling of economic aid that came just as its primary patron, the Soviet Union, was collapsing in on itself.

"The US extracted [the 1994 Agreed Framework] deal by blackmailing Pyongyang with food aid," Sputnik previously reported, referring to the agreement set up to limit Pyongyang's ability to build a nuclear weapon. That agreement fell apart in the early 2000s when it became apparent Pyongyang had violated its terms, and even though sanctions returned, the country tested its first nuclear device in 2006, claiming it had only pursued the weapons in the interests of self-defense.

The drought in 2017 was the worst experienced in the DPRK since the 1990s, the FAO said at the time.

UN officials and aid groups have met with Pyongyang to "further understand the impact of the food security situation on the most vulnerable people in order to take early action to address their humanitarian needs," UN spokesperson Stephane Dujarric told Reuters Thursday, noting the UN only received one quarter of the $111 million it requested last year for aid programs in DPRK.

As US President Donald Trump attempts to set the stage for a second round of negotiations with North Korean leader Kim Jong-un on the denuclearization of the Korean Peninsula, the US has slowly backed off some of its food sanctions and supported clearing a backlog of requests in the UN by the DPRK for aid. However, the US has made clear it will not support a significant relaxation of sanctions prior to "verified denuclearization" by Pyongyang, even though Kim has made significant strides toward calming Washington's fears by decommissioning key nuclear weapons and missile test sites.

In the first month of 2019, the US approved eight requests in the UN Security Council Sanctions Committee on North Korea for such items as solar pumps, plumbing parts, milk cans, tractor tires and children's trampolines, AFP reported on February 1. The items concern projects run by Switzerland, the US, UK, France, Canada and the International Federation of Red Cross and Red Crescent Societies (IFRC).

"The people of DPRK are enduring another harsh winter," Richard Blewitt, who represents the IFRC at the United Nations, told AFP.

Trump and Kim will meet in Hanoi on February 27 and 28.