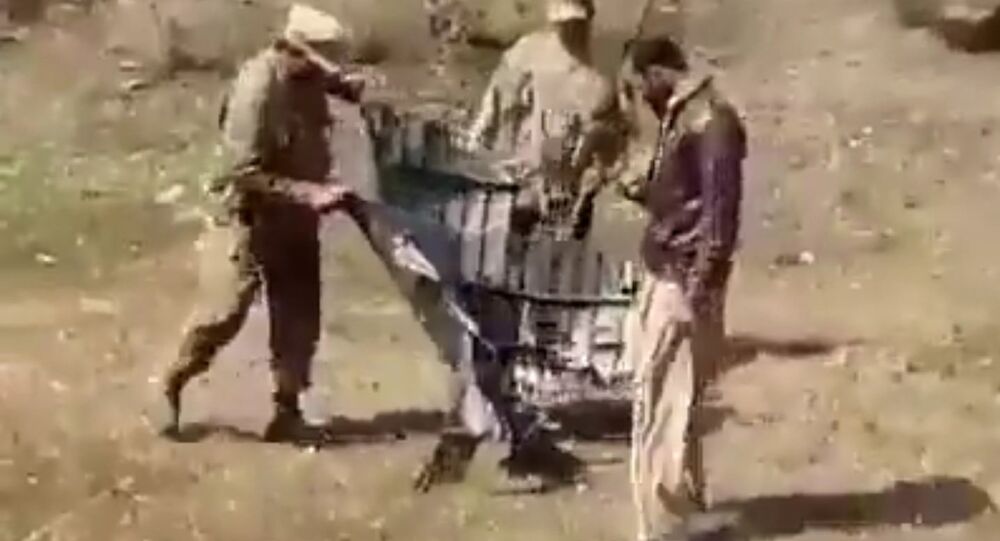 Two planes were shot down on Wednesday during the Indo-Pakistan skirmish, and the wreckage of both landed in Pakistan-administered Kashmir. One was confirmed as a MIG-21 belonging to India while the other one was an F-16 which New Delhi claims to have downed.

New Delhi (Sputnik) — First photographs and video footage of the alleged wreckage of the Pakistan Air Force F-16 fighter jet which was shot down by an Indian MiG-21 Bison — an old warhorse of the Indian Air Force (IAF) — in a dogfight have emerged on Thursday. Commenting on the photographs published by the ANI news agency, defence journalists and analysts have said that the commanding officer of Pakistan's 7 Northern Light Infantry was among the officials who inspected the site.

Why these wreckage are being taken away? Are these of F-16, which was reportedly shot down by #Indian troops.? Hiding evidence? @ZeeNewsHindi @adgpi #abhinandan pic.twitter.com/YcfYomO92h

​Media reports suggest that at around 10:05 (IST) on Wednesday, an F-16 fighter jet of the Pakistan Air Force violated Indian air space and entered the Nowshera sector. Pakistan claimed that its fighters had targeted four military installations and dropped bombs. The Indian Air Force responded instantly to the incursion, scrambling two MiG-21 Bisons which chased the F-16s and shot down one of them.

© AFP 2020 / NARINDER NANU
Pakistan Suspends India-Pak Samjhauta Express Rail Link - Reports
However, in this engagement, India also lost a MiG 21. The wreckage of both planes landed in Pakistan-administered Kashmir, and one IAF pilot who landed in Pakistan-controlled Kashmir was detained by the Pakistan Army.

"In the aerial engagement [on Wednesday], one Pakistan Air Force fighter aircraft was shot down by a MiG 21 Bison of the Indian Air Force. The Pakistani aircraft was seen by ground forces falling from the sky on the Pakistan side," Raveesh Kumar, an Indian Ministry of External Affairs spokesperson, claimed.

Indian defence analysts are claiming that some photos and videos circulating on social media are of an F-16 Block 50 fighter jet which was shot down by a MiG-21 using short-range R-73 missiles.

Here’s the proof of Pakistan’s F-16 shot down yesterday by India’s MiG-21 pic.twitter.com/EyZdyMrJxo

These are images which my sources indicate are a part of the debris of a Pak Air Force F-16 which was shot down down by the IAF MiG 21 Bison. pic.twitter.com/TA6h0DVAmJ

Earlier, the Pakistani Defence Ministry claimed that it shot down two Indian fighter jets and arrested two pilots, but later, spokesperson for the country's armed forces Major General Asif Ghafoor tweeted that only one pilot was apprehended. On Wednesday, during a press briefing, Maj Gen Asif Ghafoor said that the Pakistan Air Force did not use F-16 fighter jets in Wednesday's engagement and reports of India shooting down a PAF F-16 are incorrect.

An Indian strategist opined that Pakistan assumed that the second downed jet on its side was an IAF jet when it was actually an F-16 of PAF. The "second pilot" Pakistan earlier claimed to be in custody and in hospital may be a PAF pilot.

"If I am not mistaken, US sold new F-16s to Pakistan in 2016 under part Foreign Military Financing, as Pak promised to use them for fighting terrorism. Now they have used them in an offensive role against India. It's a clear violation and Trump, the businessman needs to be told!" Nitin Gokhale, a national security analyst, tweeted.

If I am not mistaken, US sold new F-16s to Pakistan in 2016 under part Foreign Military Financing, as Pak promised to use them for fighting terrorism. Now they have used them in offensive role against India. It's a clear violation and Trump, the businessman needs to be told! pic.twitter.com/JGiQXKDbr9