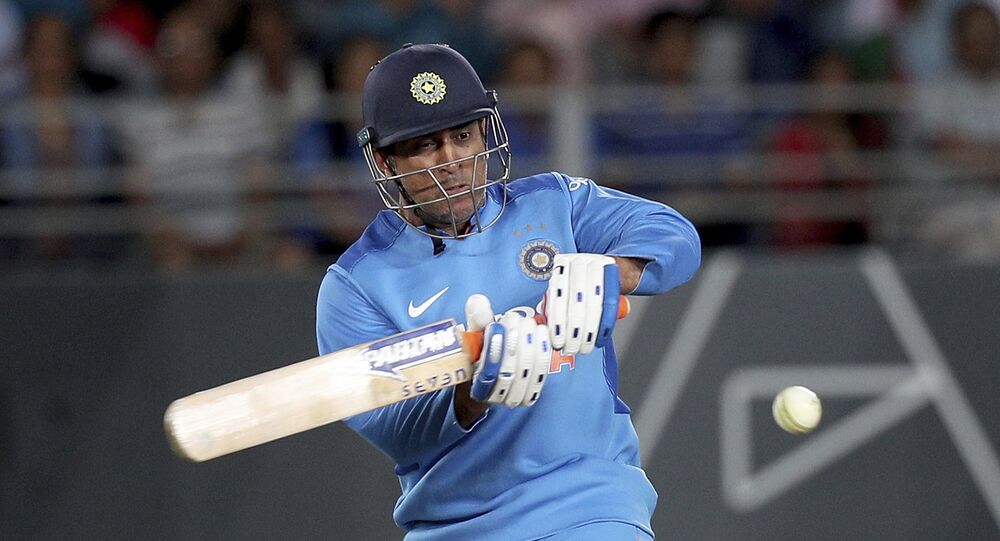 Although India lost its third T-20 cricket match and therewith the series to New Zealand 2-1, Indian cricket-star Dhoni won the hearts of his fans both on the field and social media for his patriotic gesture.

New Delhi (Sputnik) — Former cricket world cup winning Indian captain Mahendra Singh Dhoni showed his superb class again on the field at Hamilton in New Zealand, and this time it was not by scoring runs, stumping out batsmen or making wicket-keeper catches.

Noted for his level-headedness, the national sports star took the Indian flag which was touching the ground from the hand of his fan who broke the security barricade running, and handed it over to security personnel to prevent the flag from being disrespected.
An ardent fan of his tweeted a video of this, captioned, "Firstly Dhoni Gives Respect to the National Flag."

The plaudits he received from his fans was emotional and heart-warming.

"……just salute his love towards the country flag," said another fan.

When a fan ran towards the ground holding national flag in his hand. He was trying to touch feet of Mahi with flag in same hand.

First thing MS did was hold flag up.

Best moment of Today's game: A fan breakin the fences reached playground to touch #MSDhoni's feet, Tiranga (IndianFlag) was in his hand while he bent down to MSD's feet, @msdhoni presence of Mind & Patriotism, took the Flag away frm him, respected the Tiranga🇮🇳.Salute🙏 #NZvIND

Hemanth Kumar (@hemanth_Vit) called it an act of ‘great depth'.

Another fan called him a legend who is far apart from other cricketers, posting "dis is called legend……….Cricketers may come and go but there is no one like ms dhoni."