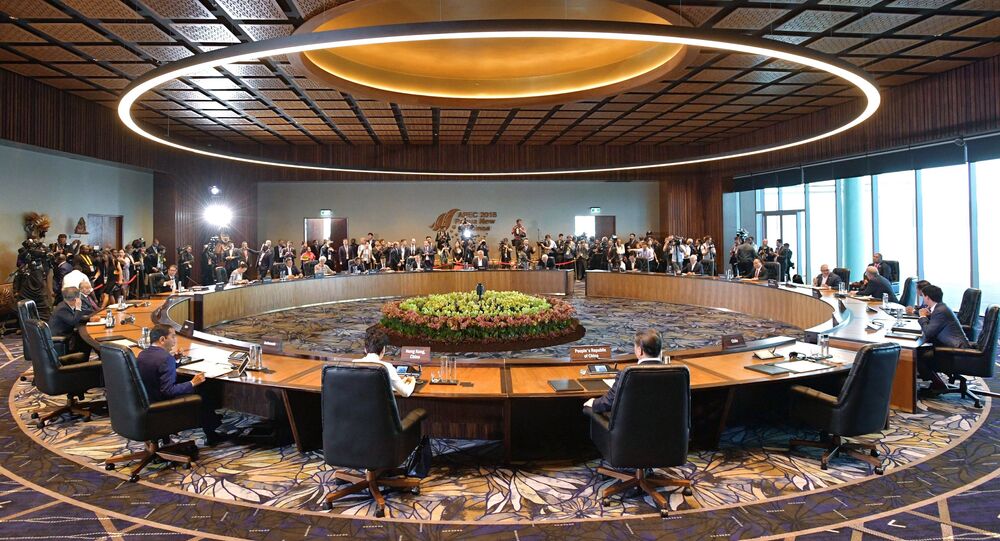 According to reports, accusations levelled by Washington and Beijing against each other nearly resulted in the failure to sign a joint communique at the end of the APEC summit for the first time in 29 years.

A source told Sputnik earlier in the day that participants of the Asia-Pacific Economic Cooperation (APEC) summit had managed to reach common ground and sign a final communique despite deep disagreements between China and the US. The participants reportedly excluded several controversial points, such as their positions on the World Trade Organization (WTO) and trade practices, in order to sign the document.

However, the AP and AFP earlier reported that the prime minister of Papua New Guinea, which hosted the APEC summit, had announced that this year there would be no communique signed by the participants. While commenting on the extraordinary event, Prime Minister Peter O'Neill noted that "the entire world is worried" about the US-China disagreements.

According to the news agencies, the draft version of the communique contained statements by the US and China that were allegedly addressed to each other. Washington harshly criticized the "unfair trade practices" that it often accuses Beijing of. China, for its part, slammed protectionism and unilateralism, which it accuses the US of.

The summit took place amid an ongoing trade war between Washington and Beijing. The two countries have mutually imposed harsh tariffs on well over $250 billion worth of goods. The conflict began after US President Donald Trump accused Beijing of employing unfair trade practices and ordered the imposition of 25% and 10% tariffs on Chinese steel and aluminium respectively.

The two sides still hope to work out their differences. Last week Trump expressed confidence that a new, better trade deal would eventually be reached and claimed that it would be "fair" to the US. The presidents of the two countries are expected to meet on the side-lines of the Group of 20 summit set to take place in Argentina on 30 November 2018.