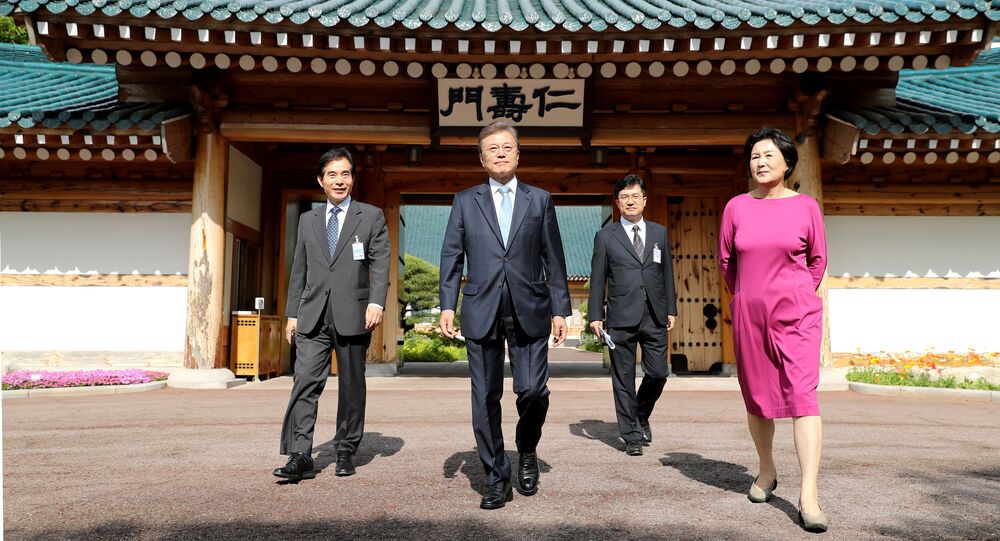 Many South Koreans trace their linkages to an Indian princess who married the King of South Korea in AD 48. A foundation stone for the Queen Suriratna Memorial Project in honor of the princess will be laid in the presence of the First Lady of South Korea.

Ayodhya, the place of birth of Lord Ram, the protagonist in the Hindu mythological epic Ramayana, will most likely host the First Lady of South Korea in the backdrop of the recent publicity garnered by the strong historical connection between Ayodhya and South Korea.

© AP Photo / Ajit Solanki
India's 10-Day Hindu Festival Marking Triumph of Good Over Evil Approaches End
The epic Ramayana depicts the story of the trials Lord Ram undergoes during 14 years of exile from his Kingdom and how at the end he emerges victorious by defeating the demon Ravana. Diwali, the festival of lights, marks the return of Lord Ram to his Kingdom after defeating the evil.

The three-day mega event between November 4 and 6 will be attended by the Governor of Uttar Pradesh Ram Naik, the CM, cabinet ministers and thousands of pilgrims. The river Sarayu will be lit with thousands of diyas (earthen lamps)  in the evening on the third day and it is this event that the First Lady of South Korea will be attending.

READ MORE: Zero is 500 Years Older than We Thought

"While on my tour abroad, I was amazed when I learned that the people in Korean peninsula identify Indians as their maternal cousins. On further query, I was told of the legendary fact that a princess from Ayodhya in India was married to a prince in Korea in the medieval era and the people still consider India as the maternal of their mother queen. We wish to strengthen our relationships on this popular sentiment of the people of Korea and likewise there are many historical instances of Indian relation with the countries in the east," Indian Minister for External Affairs Sushma Swaraj said while delivering her keynote address on the occasion of the first Indo-ASEAN youth awards recently in Delhi.

© AP Photo / Wong Maye-E
Indian PM Modi to Participate in Nepal’s Traditional Hindu Procession
Many South Koreans trace their lineage to the Indian Princess Hur Hwang-ok — as Koreans call her. An international ‘Sister City' agreement was signed between India and South Korea in 2001 to strengthen this linkage.

Thousands of South Koreans visit Ayodhya to pay homage to Queen Hur Hwang-ok. It is believed that she reached Korea on a boat, and was the first queen of King Suro of Geumgwan Gaya. She was a 16-year-old when she got married and is considered the first queen of te Gaya Kingdom of Korea. Her tomb in Kimhae is believed to be made of stones that she brought from Ayodhya.

The visit by the South Korean First Lady is expected to lend further impetus to India's soft diplomacy with S Korea — a key element in India's Act East Policy.