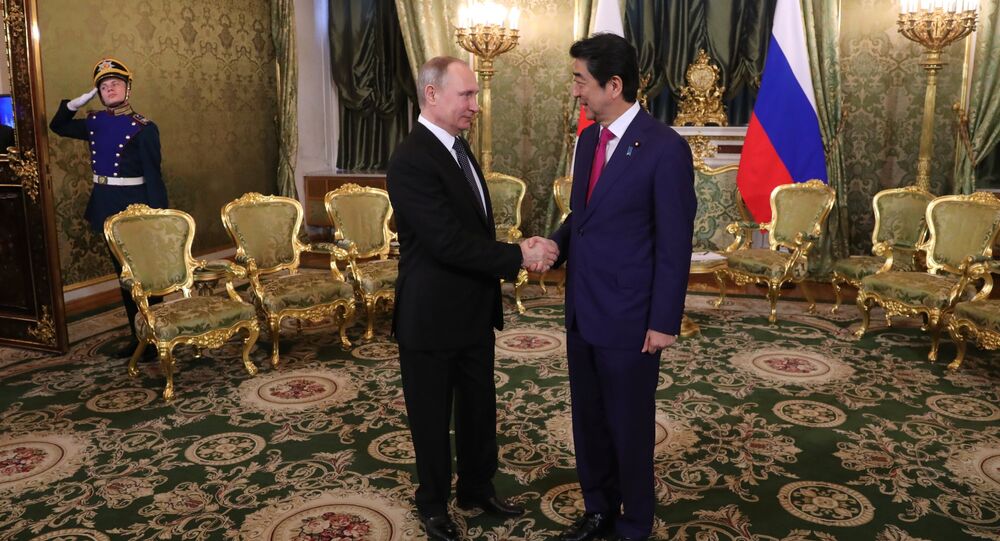 The statement was made during the Eastern Economic Forum (EEF) in Vladivostok following the words of Japan's Prime Minister Shinzo Abe that the absence of a formal peace treaty between Tokyo and Moscow was an abnormal situation.

Russian President Vladimir Putin proposed on Wednesday to sign a peace treaty between Russia and Japan before the end of the year without any preconditions.

In its turn, Japan's Foreign Ministry said that Tokyo will continue negotiations on peace treaty with the Russian side only after the Kuril Islands issue is resolved.

"The Japanese government is aware of the mentioned Putin's statement. We refrain from commenting on President Putin's public statements. But there are no any changes in the Japanese government's [commitment] to persist in negotiating the peace treaty in compliance with [the government's official position] following resolution of the issue of the attribution of the four northern islands [four South Kuril Islands: Iturup, Kunashir, Shikotan and Habomai]," the Japanese Foreign Ministry's representative said.

The Japanese Embassy in Russia told Sputnik Wednesday it was not ready to comment on the recent suggestion by Russian President Vladimir Putin to sign a peace treaty between the two countries by the end of this year.

"We are not ready to comment on it," a representative of the Japanese Embassy said.

The Japanese Foreign Ministry has earlier refrained from commenting on Putin's proposal as well.

Both Russian and Japanese leaders addressed the issue at the plenary session of the Eastern Economic Forum (EEF) in Vladivostok, with Japanese Prime Minister Shinzo Abe saying that the absence of a peace treaty between the two countries was an abnormal situation. The Russian president reaffirmed the willingness of both countries to sign such document, noting that it was necessary to create favorable conditions in the region.

"We have been negotiating for seventy years. Shinzo said that we should change approaches. So I have an idea – let's conclude a peace treaty — not now, but until the end of the year — without any preconditions," Putin said.

According to Putin, after signing the treaty with Japan, all other controversial issues can be resolved on its basis.

© Sputnik / Sergey Krivosheyev
Japan Submits Note of Protest to Russia Over Festivities in S Kurils – Official
Earlier in the day, Russian President Vladimir Putin said that Japan's readiness to engage in substantive cooperation will be always supported by Russia.

Earlier this week, Putin said that Tokyo and Moscow had discussed the peace treaty issue and both sides were ready to work in order to find options that would benefit all stakeholders.

Japan and Russia have never signed a permanent peace treaty after the end of World War II, which has long been impeding Russia-Japan relations. The main issue that hampers signing of a treaty is an agreement concerning a group of four islands that both countries claim — Iturup, Kunashir, Shikotan and Habomai, collectively referred to as the Southern Kurils by Russia and the Northern Territories by Japan.

After Putin's visit to Japan in December 2016, mutual relations between Moscow and Tokyo improved. In addition, the parties agreed to work together and jointly develop projects pertaining to the Kuril Islands that would enable people to move between the Kurils and Japan.

Japan's Authorities Recommend Evacuation of Over 300000 People Over Jebi Typhoon