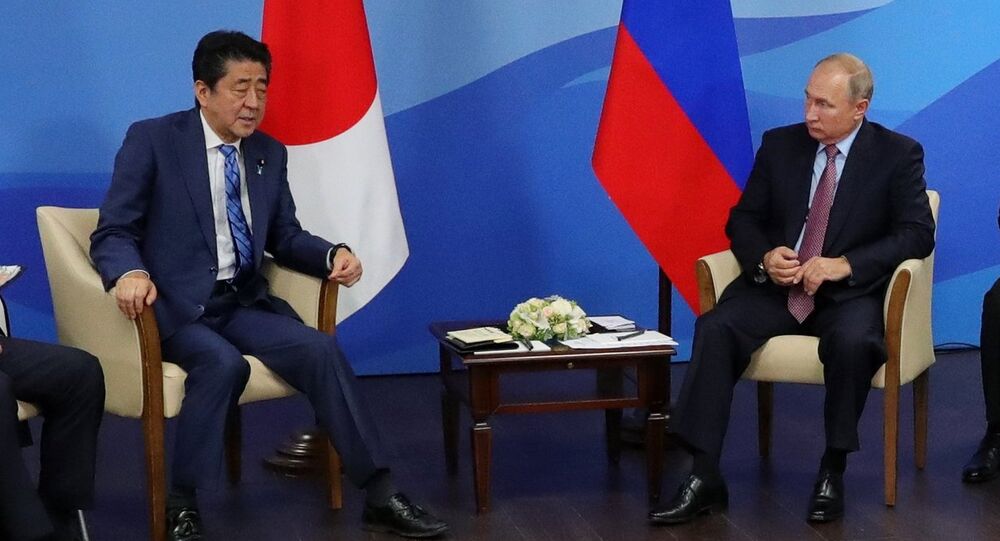 Putin and Abe have discussed pressing issues in bilateral and regional relations, as well as economic and cultural cooperation between Russia and Japan, in the far eastern Russian city of Vladivostok.

Putin said after talks with Japan's Prime Minister Shinzo Abe that Russia is ready to boost cooperation on the basis of principles of good-neighborliness and mutual interests.

"Japan for Russia is an important and reliable partner. We are determined to develop Russian-Japanese cooperation based on the principles of good-neighborliness, mutual respect and mutual consideration of interests," the Russian president said after talks with Japanese Prime Minister Shinzo Abe.

The Japanese prime minister, in turn, confirmed that both countries would make every effort to conclude a peace treaty.

"Our new approaches are changing the shape of Japanese-Russian cooperation. Without violating the legal positions of both sides, we are implementing what can be done. We are accumulating experience, we are moving toward what we, with president [Putin], aspire — toward a peace treaty. In order to solve the problem… we, together with the president, will make every effort," Abe said.

Providing economic assistance to North Korea will be possible if the country’s nuclear problem can be resolved, Shinzo Abe stated.

"If we solve the issue of the kidnapping of Japanese citizens and the nuclear missile problem in a comprehensive way, we will be able to draw a line with the unfortunate past and normalize diplomatic relations; then we will be able to provide it (North Korea) with economic assistance," Abe said after the Russian-Japanese negotiations.

Russia and Japan have agreed to organize a third Japanese business mission to the South Kuril Islands by the end of the year, Russian President Vladimir Putin stated.

"We have agreed to hold the third Japanese-Russian business mission to the South Kuril Islands by the end of this year, after which the fourth round of negotiations on joint activities will take place," Putin said after talks with Japanese Prime Minister Shinzo Abe, held on the sidelines of the Eastern Economic Forum (EEF) in Vladivostok.

According to Abe, the business mission to the Kuril Islands will take place in early October.

"We will organize a business mission in early October. This will be a very big step forward in the implementation of projects," Abe said.

The Japanese PM noted that he and Putin had also outlined a roadmap for joint projects on the disputed islands.

Russian President Vladimir Putin arrived in Vladivostok on a working visit that is scheduled to last until September 12. He will also attend the fourth Eastern Economic Forum (EEF), which will be held from September 11 to September 13.

The EEF has been held on an annual basis since 2015, serving as a platform for developing political, financial and social ties between Russia and the Asia-Pacific region.