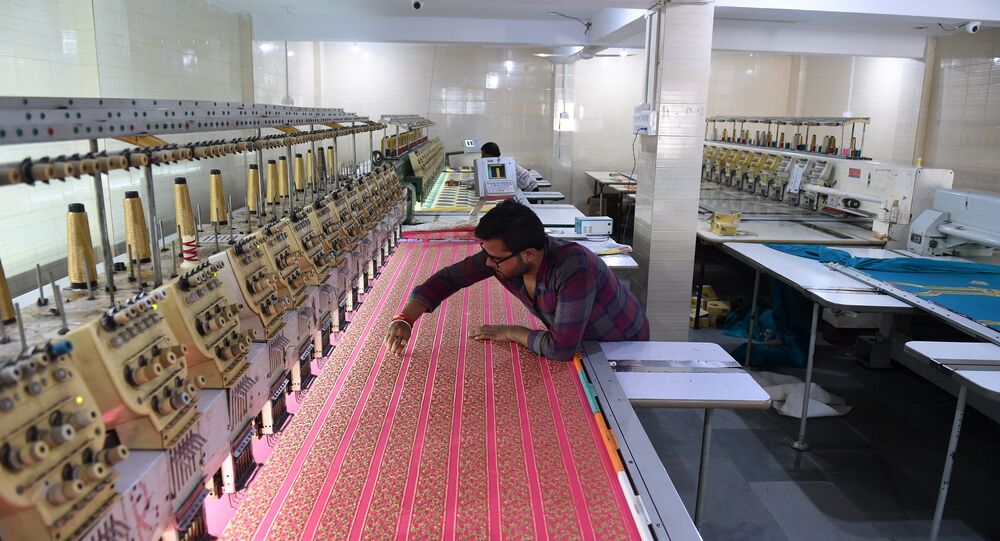 The step was taken to counter cheap Chinese imports, which have been flooding the Indian market via Nepal, Sri Lanka and Bangladesh, with whom India has free trade agreements.

The notification, tabled in the lower house of parliament on Tuesday, seeks to "increase customs duty on 328 tariff lines of textile products from the existing rate of 10 percent to 20 per cent…under Section 159 of the Customs Act, 1962."

© AFP 2020 / NARINDER NANU
India Imposes 25% Safeguard Duty on Solar Cell Imports from China, Malaysia
Last week, the Confederation of Indian Textile Industry said in a release that in 2017-2018, India exported textile goods worth $1,362 million to China, but imports from China were to the tune of $2,905 million, indicating a trade deficit of $1,543 million.

"It is pertinent to mention that during 2010-11 to 2013-14, India was a net exporter of textile and apparel products to China. However, after that, India's trade deficit with China has been constantly increasing," said Sanjay Jain, chairman of the Confederation of Indian Textile Industry.

READ MORE: India Looks to China for Bailing Out its Sugar Industry

India was a market leader in cotton yarn, but has lost almost 50% of its market to Vietnam over the last three years, creating excess capacity in the system. India's cotton yarn exports to China have decreased by 53% from 2013 to 2017, while Vietnam's exports of cotton yarn to China have increased by approximately 88% during the same period.