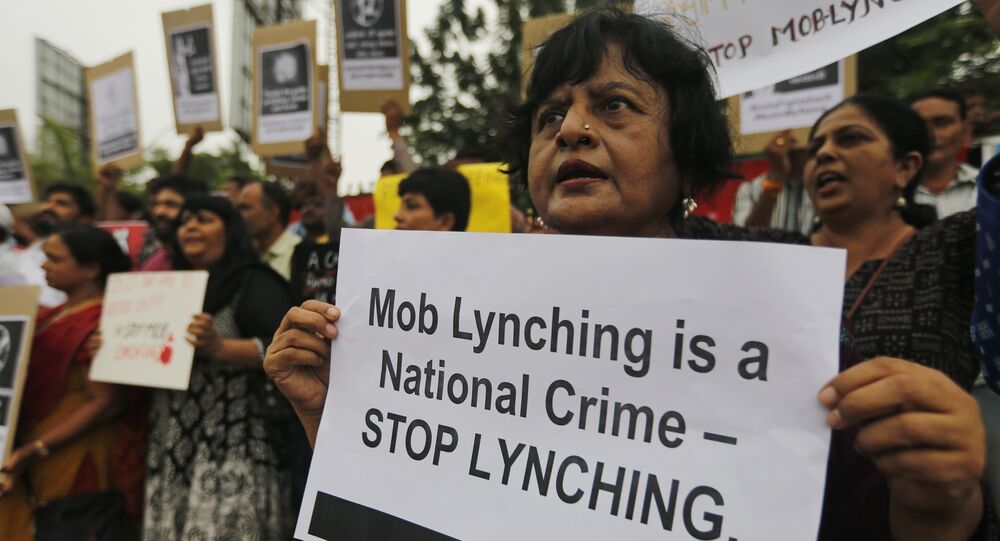 With elections just round the corner, mob lynching and mob violence has become an Achilles heel for the Narendra Modi-led government in India, as such incidences continue to occur across the country.

New Delhi (Sputnik): After being stung again by a series of mob lynching incidents, the Indian government is considering introducing new laws to tackle the menace. Of the various proposals under consideration, the main ones are amendments to the existing criminal code to classify "mob lynching" as a penal offense or introducing an entirely new act specifically for mob violence.

The government is also tightening the noose around the rumor mill that is responsible for triggering the mob violence in most of the cases. A number of checks have been put in place to regulate fake messages on social media.

Supreme Court of India on #Lynching: Mobocracy can't be allowed in a Democracy… No citizen can become a law onto himself.. Duty of state to ensure law and order situation… State should safeguard democratic and secular ethos. State has to be protect constitution @AnushaSoni23 pic.twitter.com/E607DEyRUq

"The incidents of violence are against the basic principles of humanity. I once again urge the states to take strict action in such cases," Modi said in parliament.

Anyone not bothered by India’s lynching epidemic doesn’t understand how mobs operate: anyone can be a victim. Anyone. Because mobs don’t recognize any logic once the fear of law disappears. It can very well be you tomorrow. Despite all your class privileges.

​The latest incident of mob lynching occurred on Saturday in the Alwar district of Rajasthan, when a man was allegedly lynched by a mob on suspicion of cow smuggling.

"The incident of mob lynching is a failure on part of the government. The government must punish the culprits," Sanjay Singh, a member of parliament, told Sputnik