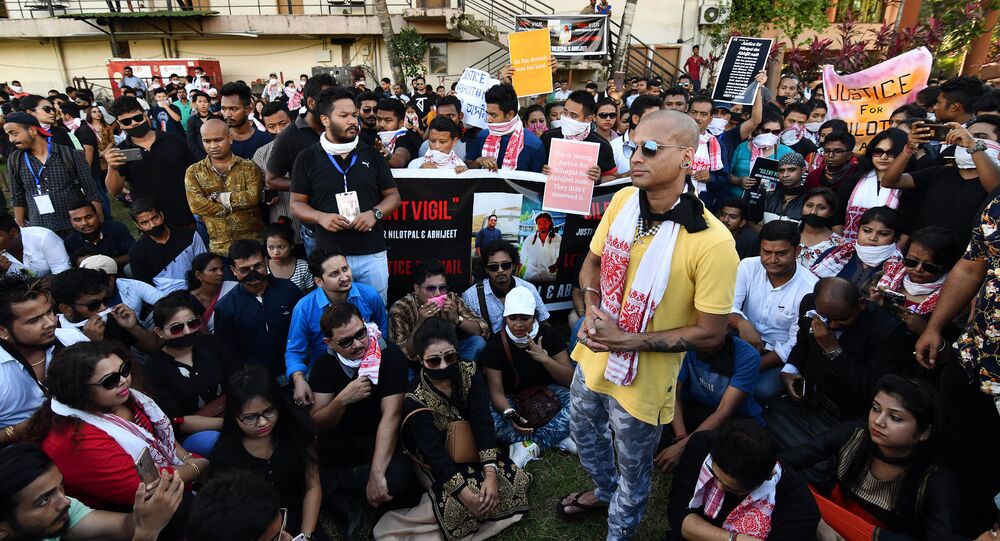 Fake warnings with photographs of suspected child kidnappers are spreading across India over WhatsApp and have led to the lynching of at least nine people in the last month, despite repeated appeals by the administration not to heed such messages.

New Delhi (Sputnik) — Thousands of people gathered in Guwahati, the capital of India's northeastern state of Assam, for the second consecutive day on Monday to protest the lynching of two youths in the city. Reports suggest that at least seventeen people, including seven policemen, were injured on Sunday in the violence that erupted during the protest.

"The commotion started after some marchers started pelting stones. Seven of our personnel were injured in stone pelting and we had to resort to a lathi-charge to disperse the protesters," Ranjan Bhuyan, deputy commissioner of police (central), told the media.

The protests spilled onto social media, with people sharing messages requesting solidarity with the protesters in ensuring justice for Nilotpal Das and Abhijit Nath, who were lynched on suspicion of being child kidnappers.

CITY | Citizens of #Guwahati unite to protest against the brutal mob lynching at Karbi Anglong and demands justice for Nilotpal and Abhijit.#KarbiAnglongViolence pic.twitter.com/MFdZnZGlkQ

© AP Photo / Tsering Topgyal
Mob Justice: Two Rape Accused Lynched by Angry Mob in India's North East (VIDEO)
The Assam police have arrested at least 19 persons since Friday, after a mob of over a hundred people nabbed Nilotpal Das and Abhijit Nath and lynched them with sticks and stones, as their faces resembled those of the persons that were identified as child lifters in unsolicited messages doing the rounds on the popular social media and smartphone messaging application WhatsApp. It was later found that both men were out on an adventure trip to a village in Assam's Karbi Anglong district, 200 km from capital Guwahati, and had nothing to do with child lifting.

The All Assamese Students’ Association (AASA), New Delhi held a prayer meet last evening in memory of Nilotpal Das and Abhijit Nath at the Faculty of Arts, Delhi University who were lynched by a mob in Assam. Protests all over Assam. HRISHITA… https://t.co/dvzJEAJM0C

​"With the latest arrest of three more persons early on Monday morning, the total number of arrests in the case now stands at 19. Some 16 people were earlier arrested. A massive manhunt is on to nab other accused in the case," G.V. Siva Prasad, superintendent of police, Karbi Anglong, told the media.

Meanwhile, the chief minister of Assam, Sarbananda Sonowal, has issued a stern warning to people spreading fake rumors on social media. "People found circulating rumors would be dealt with very firmly," he told the media in Guwahati, after holding a high-level security meeting Sunday.

The video of the lynching incident, captured by one of the attackers, showed that Nilotpal Das shouted out his name, his father's name, his mother's name to identify himself as a local, but the mob kept beating the two mercilessly.

The rumors about child lifters from outside the state roaming in the city started last month, when a video purportedly showing a child being abducted by two men riding a motorcycle was widely circulated on social media and smartphone messaging applications. In Bangalore, two people were killed last month following the circulation of a similar video. Similar incidents have been reported from the southern state of Andhra Pradesh, Telangana and Tamil Nadu.

Army Drone Tracks Aggressive Indian Tiger to Save It From Lynching