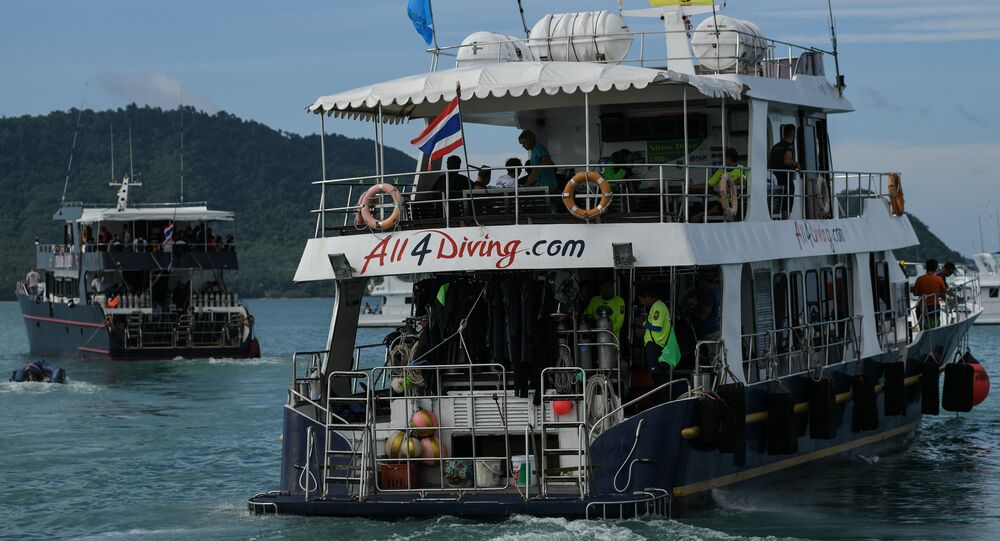 BANGKOK (Sputnik) - Four Chinese tourists missing from the boat which sank off Thailand's Phuket island were found alive on the shore, as they had not boarded the vessel, local media reported on Monday.

Phoenix tour boat, carrying tourists from China, capsized on Thursday due to a heavy storm. While some passengers and crew fled the sinking vessel by swimming or mounting life rafts, many were trapped in the lounge.

63 million baht in compensation was approved for foreign tourists in #Phuket #boat tragedy. Each family of the dead victim will receive one million baht. Meanwhile, the death toll rises to 43 and nine persons remain missing. @TNAMCOT pic.twitter.com/MNxJE9Z5OT

President Xi Jinping called for all-out efforts to find and rescue missing people and treat the injured, after two boats with Chinese tourists on board sank in a storm off Thailand's southern resort island of Phuket. pic.twitter.com/adyaYZnCfc

According to the rescue operation staff, as of Monday, there are 11 people missing, instead of 14-15 reported earlier, as four tourists listed among Phoenix passengers decided not to take the tour and did not board the boat, the Thai PBS broadcaster said.

According to the latest information, a total of 42 people were found dead, while 49 passengers and crew members were rescued by the local fisher boats and the military, the media said.