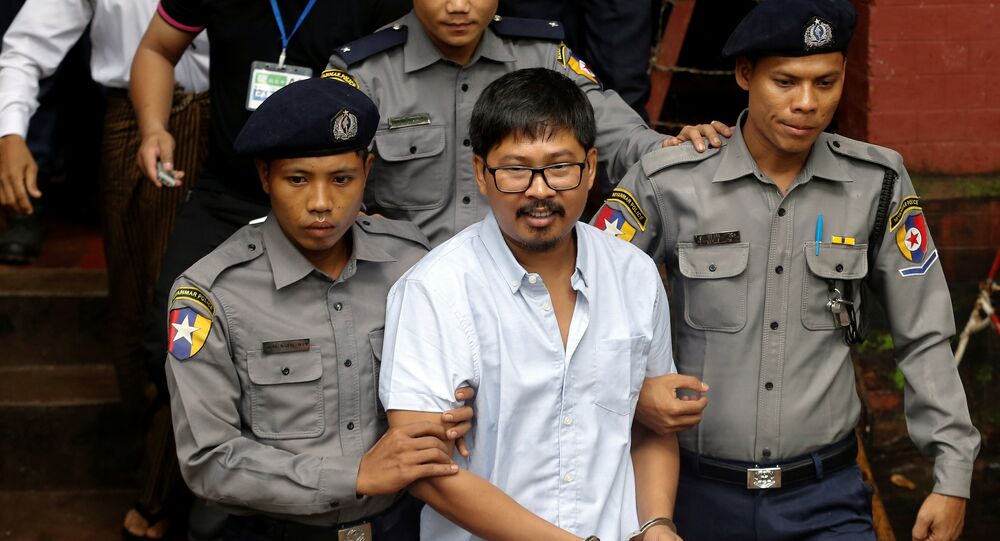 MOSCOW (Sputnik) - Myanmar's court charged two Reuters journalists with obtaining secret documents while reporting on the killings of the Rohingya people in the country's Rakhine state, media said on Monday.

The European Union Urged Myanmar on Monday to drop charges against two Reuters correspondents after a court charged them with obtaining secret state documents.

According to The Washington Post newspaper, Wa Lone and Kyaw Soe Oo, detained in December, were charged with violating Myanmar's Official Secrets Act and now face up to 14 years in prison. Reuters Editor-in-Chief Stephen Adler said, as cited by the media outlet, that the court's decision "casts serious doubt on Myanmar’s commitment to press freedom and the rule of law."

© REUTERS / Jonathan Ernst
US Journalists Claim Limited Access to Some of Trump-Kim Summit Events - Reports
According to the journalists' lawyers, Wa Lone and Kyaw Soe Oo had been entrapped by police, who invited them to a meeting back in December, handed them papers, which reportedly revealed the security forces' involvement in Rohingya killings, and immediately arrested them for possessing classified documents, the newspaper said.

Myanmar's Rakhine state has witnessed mass killings and atrocities against the Muslim minority of Rohingya since August 2017. According to Amnesty International, the government sanctioned and orchestrated crimes against humanity in the state. Neighboring Bangladesh now shelters over 700,000 Rohingya refugees who flee Myanmar for fear of prosecution.