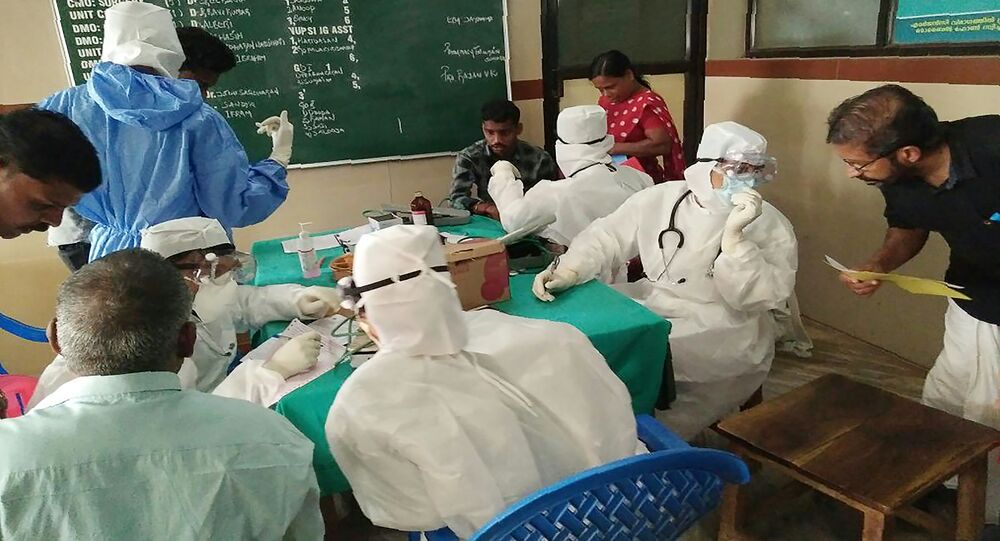 The Indian government has imported a 50-dose consignment of Monoclonal 102.4 antibodies of an anti-NiV drug, developed by Australian researcher Dr. Christopher C Broder. The researcher has claimed a 90 percent success rate among NiV patients in Bangladesh.

New Delhi (Sputnik): As an emergency measure, the Indian Council of Medical Research (ICMR) has sanctioned an import waiver on the anti-NiV drug developed by the Australian researcher Dr. Christopher C Broder. The ICMR, which serves as India's top body for the formulation, coordination, and promotion of biomedical research, has recommended direct administration of the drug on infected people in Kozhikode without going through clinical trials which are, otherwise, mandatory for all imported medicines before they can be administered to the local population.

"Nipah is a potentially fatal infection with a mortality rate of 70 to 100 percent. As of now, more than 90 contacts of the primary and secondary cases of Nipah have been listed and will be closely followed for 42 days. There is no licensed vaccine or drug for NiV across the world but after an extensive review of literature and discussions with global stakeholders, we found that Monoclonal 102.4 antibodies against Nipah virus have been developed by Dr. Christopher C Broder of Australia. The antibodies have shown promising results. The government of Queensland has maintained a stockpile of m102.4 antibodies for emergency use on compassionate grounds and has agreed to send us 50 doses, based on 1.5 gram per 75 kg person, free of cost," the ICMR letter reads.

Nipah virus is an emerging zoonotic virus (a virus transmitted to humans from animals). In infected people, Nipah virus causes a range of illnesses from asymptomatic (subclinical) infection to acute respiratory illness and fatal encephalitis.

A state health official informed that three more infected and nine others with symptoms are in the hospital. As a precautionary measure, the state administration has been monitoring 1,353 people who were in contact with the affected persons before the confirmation of the disease.

Awareness is the key to preventing the spread of NIPAH. I have directed the Health Department to create awareness among the public on the issue. However, there is no need to panic. I have also instructed the dept to take all necessary measures to prevent its possible spread.

​Despite the health department claiming that the spread of the virus has been successfully contained, infections continue to come to light in the two districts of Kerala where the virus was first detected at the beginning of this month.

"It was a highly localized infection and we have been able to contain it well," Health Secretary Preeti Sudan had said a few days ago.

The present outbreak of Nipah virus is the third in India after last two outbreaks were reported in 2001 and 2007 in the eastern state of West Bengal. The Nipah virus was first detected in a Malaysian village in 1999.