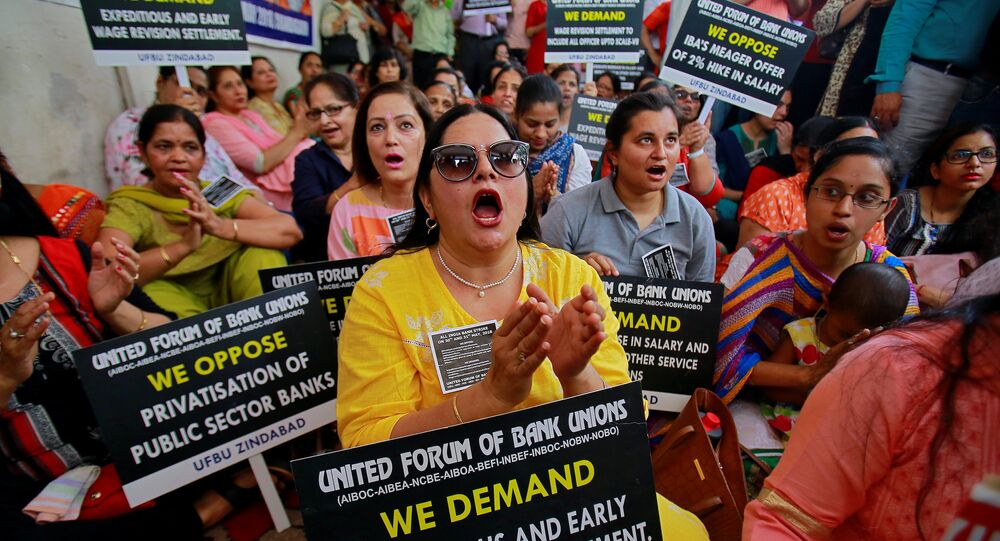 New Delhi (Sputnik) — Seeking better pay, over a million bank employees of around 40 Indian banks are on a two-day nationwide strike starting Wednesday.

Nine bank employee unions across 21 public, 12 private and seven foreign banks are participating in the strike, which was called after unions refused to agree to a 2 percent wage hike for junior level officers.

"From unions, we made it clear that the Indian Banks Association (IBA) offer of 2% was not in good taste," DT Franco, the general secretary of the All India Bank Officers' Confederation, said.

© CC0
Checking Banking Fraud: India Gets First Blockchain-Based Trade Finance Network
The Indian Banks' Association, which represents the management of the banks, had refused a wage revision pending since last November of the entire workforce due to the poor financial health of the banking system. Results ending March 2018 show that 37 banks have added approximately $19.5 billion in gross non-performing assets (NPAs) in the fourth quarter of the last financial year. Gross NPAs of the Indian banks stand at around $147 billion.

Those who are comparing #PSBs to that of Private Bank. Go and ask them to open your #Jandhan a/c. #Mudra loan. All govt sponsered scheme are done by we #bankers We are not begging we are demanding our rights #BankStrike