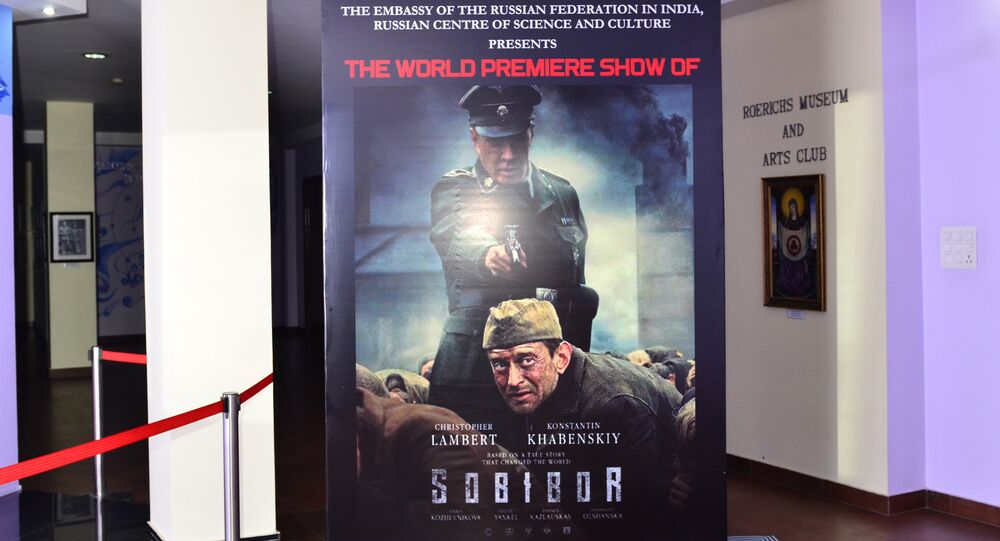 India and Russia jointly celebrated the 73rd anniversary of the Victory of the Great Patriotic War (1941-1945) by organizing a program at the Russian Center of Science and Culture (RCSC) in New Delhi on Wednesday. The occasion was made phenomenal by the world premiere of the Russian film "Sobibor."

New Delhi (Sputnik) — Such was the impact of "Sobibor" that the theatre inside the premises of the RCSC in New Delhi was packed to its capacity by an unusually large gathering who watched the entire film spell-bound. Sharing their experience, most of the viewers said the narrative of the film was gripping and heart-breaking and would remain in their memory for a long time to come.

It's a final countdown before the Premiere screening of "#Sobibor" in New Delhi, organized by @RusEmbIndia and #RCSCNewDelhi, to mark the 73rd Anniversary of the Victory over Fascism in the Great Patriotic War (1941-1945).@mfa_russia @MEAIndia @IndEmbMoscow @KremlinRussia_E pic.twitter.com/EBFb6Axke2

"Sobibor" is a war drama directed by and starring Konstantin Khabensky. The picture also stars Hollywood actor Christopher Lambert in a leading role. Produced by the Alexander Pechersky Foundation, the story of the film is based on the history of the Sobibor extermination camp uprising during World War II. A Soviet Officer Alexander Pechersky, when he was a prisoner of war in Sobibor, had managed to do the impossible to organize a revolt and mass escape of prisoners. Many of the escapees were later caught and killed. The rest, led by Pechersky, managed to join the partisans.

© Sputnik / Evgenya Novozhenina
Moscow Celebrates 73rd V-Day Anniversary With Spectacular Fireworks Display (VIDEO)
Nikolay R. Kudashev, ambassador of the Russian Federation to India, explained the significance of the Victory Day, describing it as an important milestone in world history. Touching upon the crucial importance and relevance of the film "Sobibor," the ambassador made an appeal to the audience.

"I appeal all to grasp the strong message that the film conveys and the suffering, resistance, determination, vigor and spirit of the Soviet people under Nazi torture and annihilation that existed those days," Ambassador Kudashev said.

Fedor Rozovskiy, director, RCSC, in his welcome remarks described the Victory Day as an important event in the history of Russia. Making an emphatic note on the world premiere of "Sobibor," he said it would be a fitting tribute to the great heroes, who fought the war with great fortitude making supreme sacrifice not only to safeguard their Motherland but also to eliminate forever the menace of fascism and Nazism from the world. He reminded the audience of the all-time record human death toll of 27 million. He made a clarion call to pay glowing tributes to the Soviet people and the personnel of the Red Army, who sacrificed their precious lives at the altar of the service of the nation and all mankind.

A photo exhibition was also inaugurated for the occasion.

Recalling the contribution of the Indian Forces and the strength of the Indo-Russian friendship on the occasion, Ambassador Ashok Sajjanhar said that victory of World War II and its remembrance is the right occasion for people of both countries to look back at the Indo-Russian collaboration and alliance.

"The friendship between India and Russia predates the world war history. It is deep-rooted and strongly saddled. The contribution of the Indian men in the battle and evacuation of allied soldiers in Dunkirk is part of the golden history and is just one of the strengths in our alliance. The friendship is time-tested and is destined to grow further," former Indian diplomat Ashok Sajjanhar said, sharing his views with Sputnik.

Indian soldiers were part of the British Expeditionary Force (BEF) in the Animal Transport Company. Four of these companies with mules were part of the Royal Indian Army Service Corps (RIASC) which played the most important role of rescuing allied forces from the Dunkirk beach in France on time and thus changing the course of history.