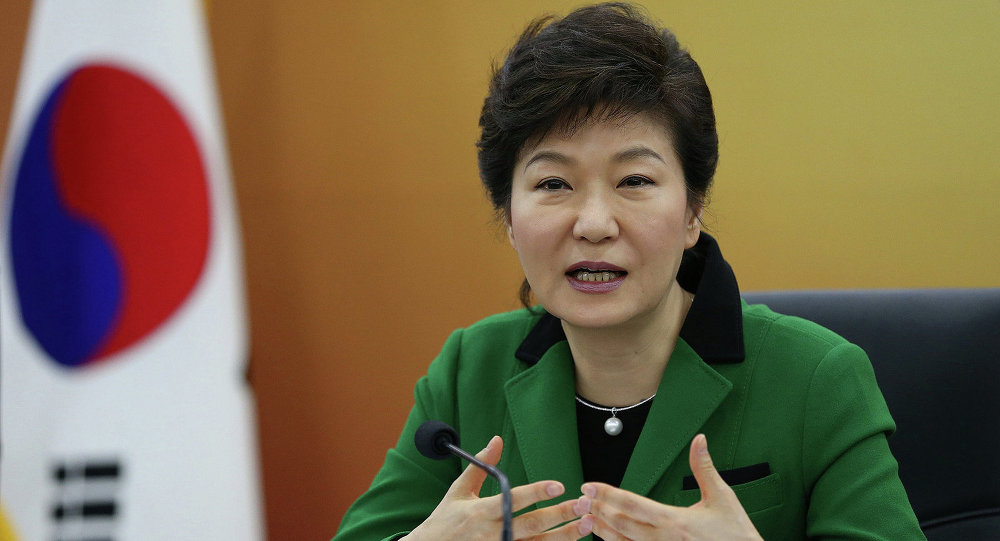 A court in South Korea has sentenced former President Park Geun-hye to 24 years in prison for her role in a corruption scandal. Sputnik looks at her long and tempestuous life in politics.

Park Geun-hye was 12 years old when her mother was assassinated.

Five years later her father, a former general who became president and began the astonishing modernization of South Korea's economy, was also murdered.

Polls have frequently found Park Chung-hee remains among the most revered of the Republic of Korea's leaders but he was a dictator who ruled with a rod of iron.

He locked up and tortured opponents and restricted freedom of speech and a free press, leading to huge student protests, especially in October 1979, just before he was killed.

Assassinated by Head of Korean CIA

His assassin was not a left-winger or a North Korean agent but one of his closest advisers and friends, Kim Jae-gyu, the director of the Korean Central Intelligence Agency, which had been set up and modelled on the CIA.

Kim was hanged the following year and General Chun Doo-hwan took power after a military coup.

“Each person would have had different feelings about former President Park. However, a bleak and dry wind blew across all of us today. “This is a heartbreaking incident for one person's life as well as for the country as a whole."

Geun-hye grieved for her parents, especially her mother Yuk Young-soo, who was shot dead by a North Korean sympathizer on a trip to the theater in 1974.

But the teenage orphan was forgotten about, a legacy of a political era from which South Korea had left behind.

In that year she suddenly won a by-election in Dalseong county and became an assemblywoman for the Grand National Party.

The Grand National Party was the inheritor of her father's old Democratic Republican Party and it espoused a conservative, free-market, right-wing agenda.

But it was out of power for a decade.

During that time Park busied herself with organizing on the ground and her success in getting the votes out for the GNP resulted in her being nicknamed the "Queen of Elections".

In 2008 the GNP's candidate, Lee Myung-bak, was elected President but five years later he was forced out by scandal and earlier this month he was arrested over corruption allegations.

Park Geun-hye was also fined $17 million after being found guilty on almost all corruption charges against her. she's certain to appeal

In 2013 Park Geun-hye swept to power and took a hawkish position on relations with Pyongyang.

In February 2016 an article in the ruling party newspaper Rodong Sinmun described Park as a "crazy old b*tch", leading Seoul to condemn the use of "base, vulgar language."

But the following month another article called her an "ugly female bat."

The article, published by the official KCNA news agency, had a cartoon of a panicking Park losing her dress and shoes as she ran to a bunker after hearing of one of North Korea's nuclear tests.

She was accused of having allowed her long-time friend and associate Choi Soon-sil to get involved in state affairs even though she did not hold any elected position.

Choi's father, Choi Tae-min, had set up a cult, Yongsae-gyo (Church of the Spirit World) in the 1970s and he had inveigled himself into Park Chung-hee's inner circle after the assassination of his wife in 1974.

Choi Tae-min — sometimes dubbed Korea's Rasputin — had told Park Chung-hee his wife, Yuk Young-soo, had appeared to him in his dreams and asked him to look after his daughter, Park Geun-hye.

Choi's sinister influence on Park was reportedly one of the reasons he was assassinated.

A big day in South Korea: for the first time, a court will live-broadcast its ruling, and not just any ruling. It's the sentencing for former president Park Geun-hye. Prosecutors are asking for a 30 year prison term. pic.twitter.com/KhjJp3c2DV

Kim was eventually convicted of conniving with Choi to extort US$54.9 million from South Korean "chaebols" or big conglomerates, including Samsung, in exchange for favors.

In December 2016 Kim was impeached and in March 2017 she was arrested.

During the hearing on Friday, April 6, prosecutors demanded a 30 year sentence and a fine of $110 million but in the end she was jailed for 24 years and fined $17 million.