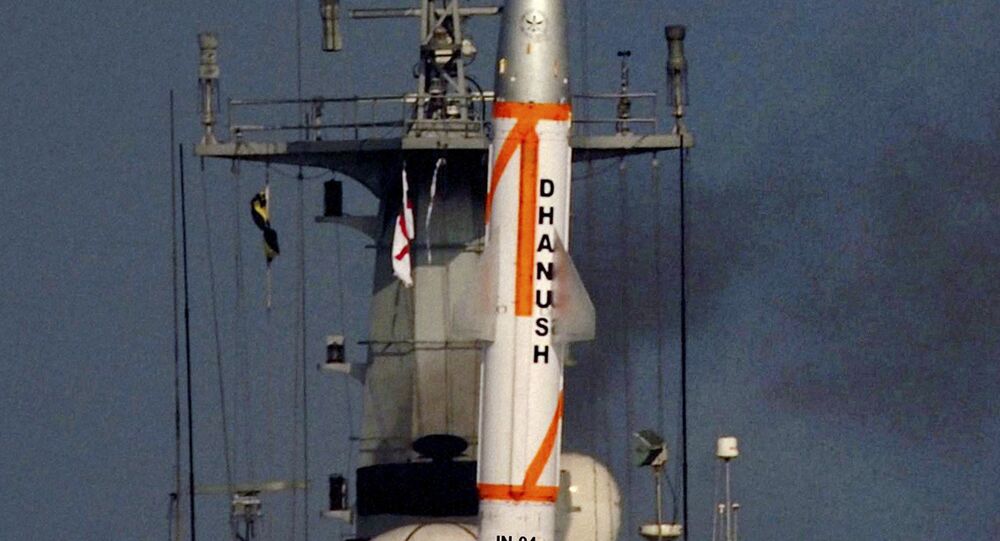 This was the third test in a month of Dhanush, which is the naval version of the Prithvi missile. It has the capability to carry conventional and nuclear warheads and strike sea and land-based targets; it can hit targets at a distance of up to 350 kilometers.

New Delhi (Sputnik): The Indian armed forces have successfully test-fired nuclear-capable surface-to-surface ballistic missile Dhanush in full operational configuration on Friday morning from a naval warship positioned in the Bay of Bengal. The trial was conducted at about 10.52 am (Indian Standard Time) by the Strategic Forces Command (SFC) of the Navy from an undisclosed location nearly 45 km from the Paradip coast.

The Dhanush missile is a single-stage, liquid-propelled, short-range ballistic missile and is the naval variant of the Prithvi missile. This was the third test of this version of a Prithvi missile this month. On Wednesday, the SFC of Indian Army had successfully conducted the first night trial of Prithvi-II ballistic missile from the Integrated Test Range (ITR) off Odisha coast.

"It was a textbook launch and fantastic mission accomplished. The missile has achieved close to zero circular error probability," a defense official who did not wish to be named confirmed to Sputnik.

The missile is about 8.53 meters in length and 0.9 meters in diameter; its launch weight totals about 4.4 metric tons. Dhanush has already been inducted into the armed forces and is under production after it successfully completed several developmental and user trials.