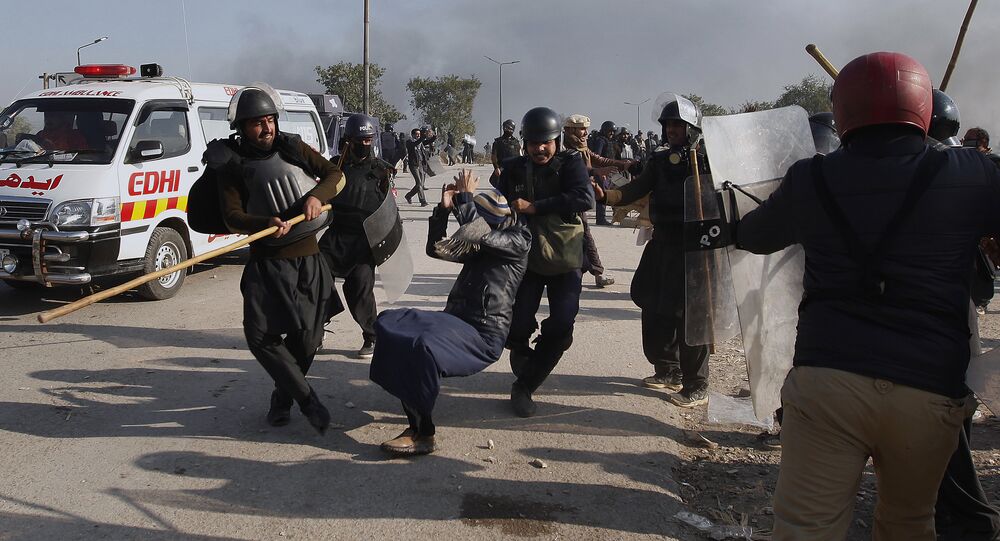 At least 200 people have reportedly been injured and a police officer has died as a result of clashes between protesters and security forces in the Pakistani capital as security forces launched an operation to clear an almost three weeks long sit-in by religious groups.

The Pakistani government has decided to summon army forces to country's capital Islamabad to establish order in the city following weeks of unrest caused by protesters opposing an amendment to election act, according to a statement issued on Saturday night.

"The Federal Government… is pleased to authorize the deployment of a sufficient number of troops of Pak Army to be determined by the Commander 111 Brigade, in aid of civil power to control law and order situation in Islamabad Capital Territory," the statement read.

According to state-run Pakistan TV citing the Interior Ministry, the government has called in the army to help disperse protesters in Islamabad, who had refused to leave the streets, prompting police to use tear gas and water cannons earlier in the day.

#Pakistan: The military has been mobilized in #Islamabad for protection of important building and to stop the protest: as violent protests continues to cripple the city… pic.twitter.com/ZDT4taJq0E

Earlier in the day, media reports suggested that at least 200 people have sustained injuries and a police officer has died as a result of clashes between protesters and security forces in the Pakistani capital as security forces launched a massive operation to clear an almost three weeks long sit-in by religious groups after late on Friday a warning was issued urging the participants of the rally to leave the streets.

Mass protests have been ongoing in Islamabad for several weeks already after the authorities in October decided to amend the election act by excluding the provision, which obliged the candidates to recognize that Prophet Muhammad is God's final prophet. Pakistani religious organizations opposed the move amid concerns that non-Muslim candidates will be able to register in the lists for Muslim candidates.

Protests break out across whole #Pakistan in support of the Islamist after Govt's crack down on court order.

Protests have spread to other Pakistani cities, such as Karachi, Lahore, Faisalabad, Gujranwala and Sambrial, Geo TV reported.

Police resort to shelling against protesters at Star Gate in #Karachi. Multiple protests have sprung up across the country after the operation against members of the #FaizabadDharna in #Islamabad began this morning. pic.twitter.com/dxawLryx6v