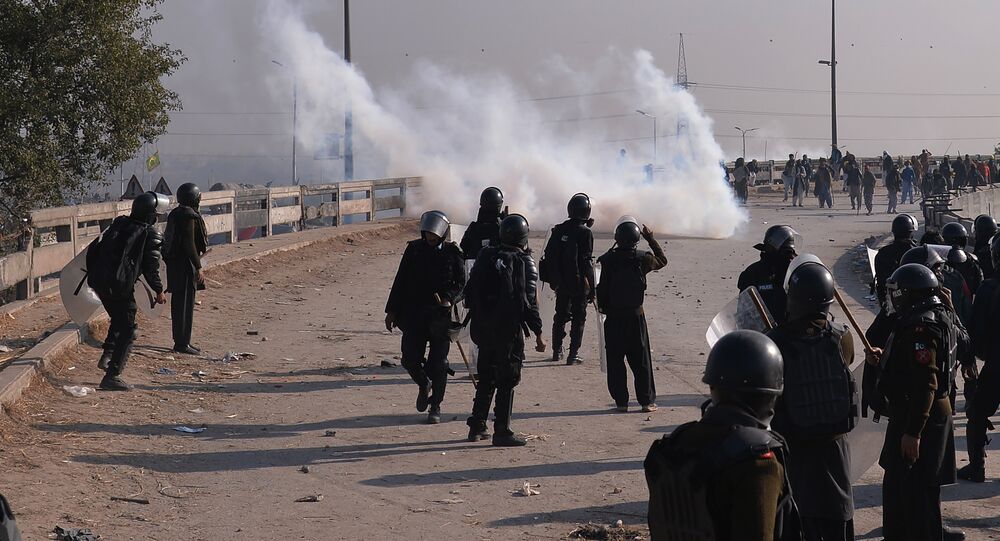 Over 200 Injured in Islamabad as Police Disperse Religious Protest- Reports

Pakistani citizens have been protesting for several weeks against an amendment to the Election Act.

MOSCOW (Sputnik) — At least 200 people have sustained injuries and a police officer has died as a result of clashes between protesters and security forces in the Pakistani capital as security forces launched an operation to clear an almost three weeks long sit-in by religious groups, Geo TV reported Saturday.

According to the broadcaster, Pakistani police have used tear gas and water cannons to disperse protesters, detaining dozens of people.

Mass protests have been ongoing in Islamabad for several weeks already after the authorities decided to amend the Election Act by excluding a provision that had obliged candidates to confirm the Finality of Prophethood, which is the unanimous belief of the Muslim world that the Prophet Muhammad was the last prophet of Allah. Pakistani religious organizations opposed the move amid concerns that non-Muslim candidates would be able to run for office.

On late Friday, the authorities issued a last warning urging the protesters to leave the streets. After they refused to obey, the police launched an operation to disperse the participants of the rally, the broadcaster reported.

According to the broadcaster, around 8,000 servicemen are participating in the operation. A total of 54 people were reportedly delivered to hospitals, including 14 security officials as clashes between police and demonstrators erupted.

Apart from the capital, protests are reportedly taking place in the southern Pakistani city of Karachi and northern district of Sialkot.