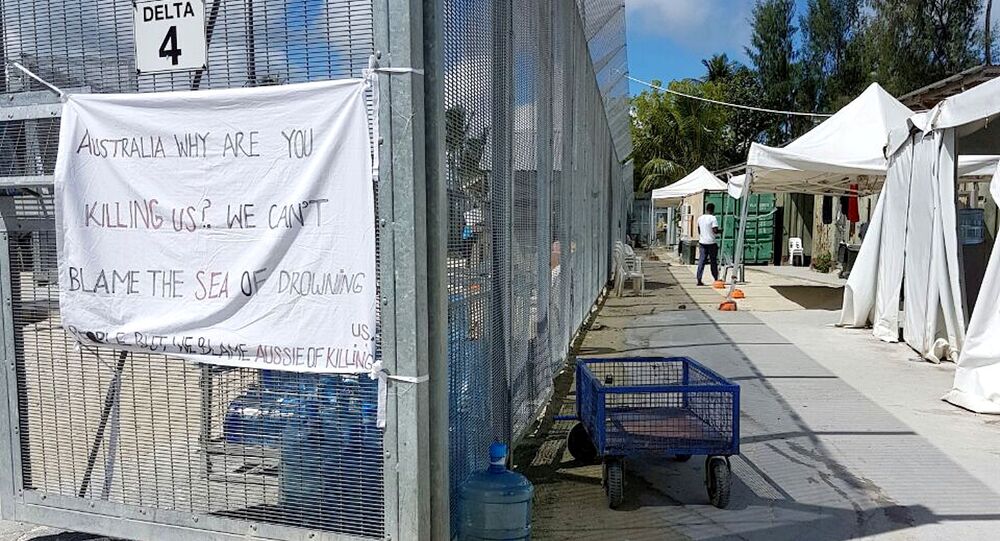 About 50 asylum seekers were forcibly moved out on Thursday with police razing the shelters and destroying the possessions of hundreds of asylum seekers, who refused to leave the camp which was shut down on October 31, citing fears for their safety.

Police Commissioner Gari Baki said in a statement that Thursday’s relocations were done "peacefully and without the use of force," the Australian Broadcasting Corporation (ABC) reported.

© REUTERS
'So Scary': Papua New Guinean Officials Start Destroying Manus Island Shelters (GRAPHIC VIDEO)
"Manus is a peaceful island and I am sure it is a walk in the park compared to what they left behind in their respective countries."

"The fact is that we are not moving them into the jungle … they are being relocated to two centers where there is water, electricity, food and medical services," he added.

Tim Costello, the chief advocate for World Vision Australia, was less optimistic saying that some of the new sites the refugees were being relocated to, were not up to standard.

"I got into West Haus and I can tell you this is a construction site, this is not finished. There is earth-moving equipment, there are open drains," he told RN Breakfast, a national early morning news program in Australia.

Many refugees, including Behrouz Boochani, an Iranian refugee, who has been acting as a spokesman for the asylum seekers, agree with Costello, describing the new accommodation as a "real prison.".

On Friday morning, Boochani said that police had "attacked" the camp again and were forcing the remaining men to new camps.

"Police attacked the prison camp and the refugees are saying that they beat them," he wrote.

The United Nations called for calm Thursday after receiving reports of force being used to move asylum-seekers from the Manus Island center.

Even though Australian authorities claim that the alternative accommodation for the asylum seekers is ready, the UN's refugee agency says that it is still “under construction, is inadequately secured, and lacks medical care and “most basic services."

The refugees had initially been offered to resettle  in Papua New Guinea, apply for residence permits in Cambodia or a transfer to Nauru, but only a handful have agreed to do so.

Under the July 2013 Regional Resettlement Arrangement between Australia and the PNG, also known as the PNG solution, asylum seekers coming to Australia by boat without a visa were to be transferred to Manus Island.

Australia also has a detention center on Nauru Island in the western Pacific. On October 31, Australia officially closed the Manus Island detention camp cutting off electricity and water but hundreds of refugees who lived there refused to leave the facility.