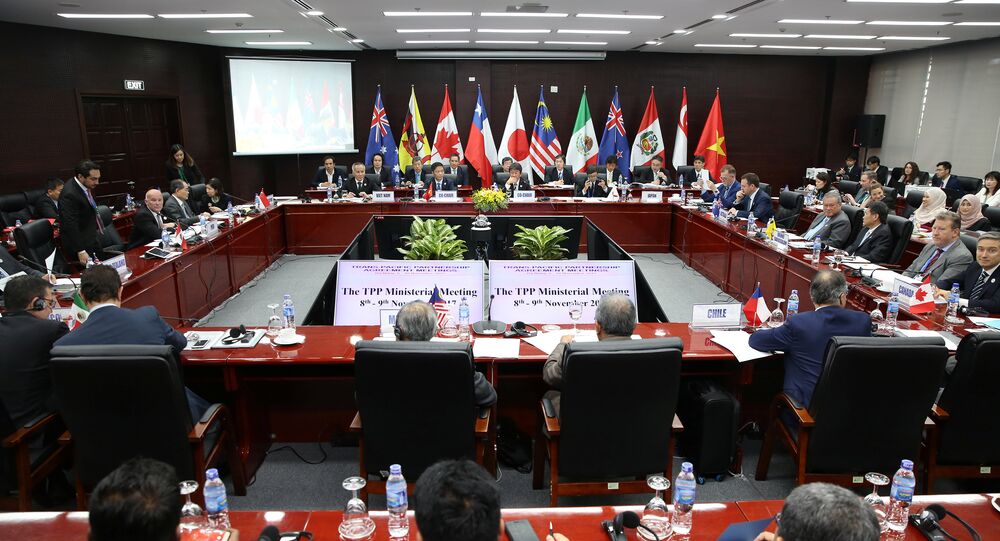 After Donald Trump decided to withdraw from the Trans-Pacific Partnership (TPP) in favor of his "America First" policy, the future of the trade deal was uncertain. However, the results of the APEC summit in the Vietnamese resort of Danang demonstrate that the free-trade deal is not yet dead.

DA NANG (Sputnik) — In order to come into force, new provisions of the reformed Trans-Pacific Partnership, now called the Comprehensive and Progressive Agreement for Trans-Pacific Partnership (CPTPP), must be signed by at least six members of the deal, Vietnamese Trade Minister Tran Tuan Anh said on Saturday at a press conference during the APEC summit.

The talks about the possibility of reviving the free-trade deal were held on the sidelines of the Pacific Rim summit between 11 countries. According to Anh, TPP countries "have overcome the hardest part."

The #TPP advances without United States. The deal would now be called the Comprehensive and Progressive Agreement for Trans-Pacific Partnership (CPTPP) #APEC2017 pic.twitter.com/OIEz3zqnTh

"It took us four months. We last met in July to outline the agreement. And it reflects the pragmatism of the parties", said Anh, referring to the two-day meeting on the future of the deal in July 2017 in Japan’s Hakone.

© REUTERS / KYODO
Japanese PM Wants to Continue TPP Talks Despite US Withdrawal – Reports
However, on Friday the deal still seemed doubtful, as a summit of TPP leaders was canceled due to the absence of Canadian Prime Minister Justin Trudeau. Canada's trade minister later explained that Trudeau did not attend the meeting because of "a misunderstanding about the schedule".

The deal still needs to be finalized since ministers of trade announced a preliminary deal and there are some details to work out later.

According to the Vietnamese trade minister, 20 provisions of the original TPP agreement would be suspended.

"There are also four specific items for which progress was made, but for the full consensus to be reached on those, we still need time," the minister elaborated.

© REUTERS / Hyungwon Kang
How China Can Learn From US TPP Mistakes to Solidify Own Positions in Asia-Pacific
Japanese Minister for Economy, Trade and Industry Toshimitsu Motegi, who co-chaired the press conference, added that the new agreement’s quick entry into force and adhering to the original spirit of the TPP are the "two main objectives" of the deal’s members.

"All the 11 countries are on board and this would send out a very strong positive message to the United States and other Asia-Pacific countries in the region," Motegi added.

READ MORE: Why It's Vitally Important for Japan to Sustain Relations Within TPP Without US

The TPP agreement, which aims to remove trade barriers among its signatories, was originally signed in 2015 by Australia, Brunei, Canada, Chile, Japan, Malaysia, Mexico, New Zealand, Peru, Singapore, the United States and Vietnam. In January, US President Donald Trump signed an executive order on the US withdrawal from the agreement as he believes the deal is against American national interests.