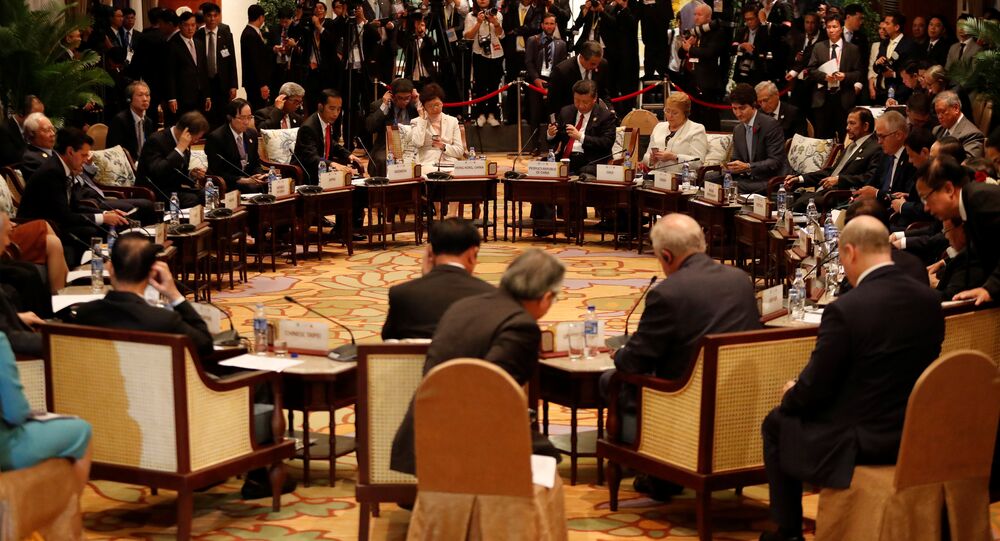 The joint declaration of the APEC countries' leaders was issued on the second day of the summit in Vietnam.

DA NANG (Sputnik) — Leaders of APEC nations on Saturday held a final plenary session of the summit in Vietnam's Da Nang. TThe results of the session are reflected in the joint declaration. The following issues are reflected in it.

Free-Trade Agreement in the Asia-Pacific

© Sputnik / Michael Klimentyev
Trump: 'Having a Good Relationship With Russia is a Great, Great Thing'
On Saturday, the APEC Leaders reiterated their commitment to the full implementation of the Free-Trade Agreement of the Asia-Pacific (FTAAP).

"We support the eventual realization of an FTAAP aiming at further APEC’s regional economic integration. We back the economies' efforts to FTAAP's implementation", the declaration said.

Moreover, they have expressed support for any other possible talks on free trade zones in their joint Da Nang declaration.

"We encourage economies to make further progress and to enhance APEC economies’ ability to participate in comprehensive free trade agreement negotiations in the future," it read.

The Free Trade Area of the Asia-Pacific, known as the Bangkok Agreement until November, 2005, was signed in 1975 and is the oldest preferential trade agreement between the Asian-Pacific countries. Bangladesh, China, India, Lao PDR, Republic of Korea, and Sri Lanka are the parties to this treaty.

APEC has confirmed that its' member economies respected WTO rules aimed at ensuring fair and transparent multilateral trading systems. They have also expressed willingness to work together it to further improve its work.

"We welcome the entry into force of the World Trade Organization (WTO) Trade Facilitation Agreement (TFA) and call for its full implementation. We recognize that it helps to generate benefits for all economies. We are ready to work with other members of the WTO towards a successful 11thWTO Ministerial Conference," in their joint Da Nang declaration released Saturday.

© AP Photo / Mark Schiefelbein
APEC Summit Delegates Hope Reaching Deal on TPP May 'Become Impetus for Trump' to Reconsider Withdrawal
They have also noted the necessity of the future work to enforce the effective WTO rules'.

"We underline APEC’s crucial role in support of a rules-based, free, open, fair, transparent, and inclusive multilateral trading system. We commit to work together to improve the functioning of the WTO, including its negotiating, monitoring, and dispute settlement functions, to adequately address challenges facing the system," the declaration added.

APEC and the WTO are complementary in that both are working towards the same goals of free and open trade and investment across borders.

APEC operates on the basis of non-binding commitments, open dialogue and equal respect for the views of all participants. Unlike the WTO or other multilateral trade bodies, APEC has no treaty obligations required of its participants. Decisions made within APEC are reached by consensus and commitments are undertaken on a voluntary basis.

Additionally, 21 APEC nations' leaders on Saturday expressed their concern over the rising terrorist threat in the region, in particular, from Daesh. Meanwhile, APEC economies commit to consistently and effectively respond to the terrorist challenges in the region and their economic impact," the declaration added.

"We express concern over the growing threat of terrorism in the APEC region, which stems from Daesh, Al-Qaida, and other terrorist organizations. International traffic enhances the channels of terrorist financing," the declaration reads.

For instance, the Islamists from the Maute group attacked Marawi, located on the island of Mindanao (the Philippines). This incident forced the government to start a military operation in the region. The conflict led to numerous victims, the evacuation of civilians from the city, and the declaration of martial law on Mindanao by Philippine President Rodrigo Duterte. He declared the liberation of Marawi on October 17.

"We favor enhancing energy security in order to sustain economic growth in the APEC region. We encourage the facilitation of environmentally-friendly trade and investment, free access to affordable and reliable energy, and promotion of sustainable, efficient and clean energy sources. In this regard, it would contribute to reducing global greenhouse gas emissions," Da Nang declaration reads.