Trump: 'Having a Good Relationship With Russia is a Great, Great Thing' 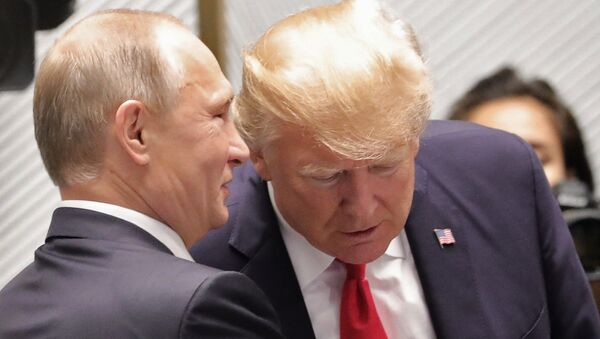 The US president has commented on the relationship between Moscow and Washington during the APEC summit in Da Nang.

US President Donald Trump said that Russian leader Vladimir Putin once again denied reports of possible interference by the Russia in the US president elections.

Trump noted that the investigation of "Russian interference," which is now being conducted by the US Special Prosecutor and in Congress, is an obstacle to the establishment of relations between Moscow and Washington and "the whole thing was set up by the Democrats". He called for "looking at [Tony] Podesta."

The US leader added that Putin is offended by such accusations against Moscow.

"And I believe, I really believe, that when he tells me that, he means it. He says, 'I didn't do that.' I think he is very insulted by it," Trump said.

The US president expressed his readiness to cooperate with his Russian counterpart:

"I can't stand there and argue with him…. I'd rather have him, you know, work with him on the Ukraine than standing and arguing."

Donald Trump said that the agreements on Syria that were announced in a joint statement with Russian President Vladimir Putin would save "thousands of lives."

Earlier, during their brief meeting on the sidelines of the APEC summit, Putin and Trump approved a joint statement on Syria.

Also, Trump said that Vladimir Putin "could really help" the US in resolving the North Korea crisis.

"We could really be helped a lot with Russia having to do with North Korea. You know you are talking about millions and millions of lives. This isn’t baby stuff, this is the real deal. And if Russia helped us in addition to China, that problem would go away a lot faster," Trump said on board of a presidential jet on the trip from Da Nang to Hanoi, as quoted by the presidential press pool.

According to Russian presidential press secretary Dmitry Peskov, Trump noted that a possible conversation between the presidents about the DPRK crisis would be in the interests of all parties.