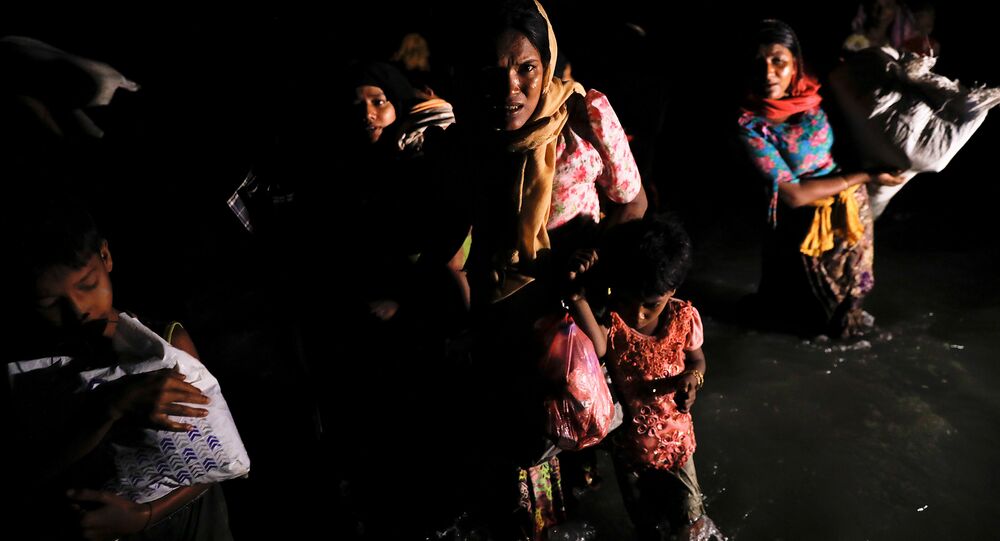 Speaking to Sputnik, Rohingya Muslims living in Refugee camps in Bangladesh recounted horrific details of the bloodbath, loot, and arson they witnessed before fleeing Myanmar. Most of the refugees, living in cramped camps with little or no food, are women and children whose husbands and fathers were torched, hacked or killed for no apparent reason.

New Delhi (Sputnik) — With more and more Rohingya Muslims fleeing Myanmar with each passing day, the world is incessantly witnessing horror stories of atrocities on the Rohingya community in Myanmar.

In a fresh bout of exodus which began two months ago after small bands of Rohingya militants carried out attacks triggering massive retaliation from the Myanmar military, independent estimates say more than 600,000 refugees have fled to neighboring Bangladesh since August 25 this year.

The gravity of the situation is colossal not only because of the numbers but because most of the refugees seeping into Bangladesh are women and children who are malnourished and mostly alone.

© REUTERS / Jorge Silva
'They Killed My Whole Family': Rohingya Refugees Search for Safety in Bangladesh
Eleven-year-old Mohammed from Mongdu in Arakan, who only shared his first name, recounts the ordeal his family went through in seeing his father being brutally murdered outside the house before he fled to Bangladesh with his mother and sisters.

“They came to our house and tied my father, brought him in the yard and he was beaten to the death. Later on, they poured petrol on the dead body and burnt it. While another group of soldiers looted our house. My mother and my two younger sisters took shelter in the bush. They threatened to kill all of us if we did not leave the place. We rushed to Bangladesh on the same day. We came here 3-weeks ago and we are at least alive here,” Mohammad told Sputnik.

Some among the lot of refugees in Bangladesh’s Cox’s bazar narrate their prosperous life back home while they struggle for existence and live in fear now.

"I had 6 acres of paddy field and a grocery shop at Buchidong township of Arakan state. My family was very rich. People used to respect me in my community. I have 5 daughters and 2 sons. The Myanmar army confined us within the village for several weeks. We were not even allowed to go to the nearby market for fetching daily needs. If somebody from the Muslim community was found in the nearby markets, they were brutally tortured.  With no source of basic needs, our life had become hell over there,” a frail-looking 57-year-old man from Buchidong in Myanmar, now living in a roadside tent in Bangladesh’s Cox Bazaar told Sputnik. He was not comfortable to share his name.

© REUTERS / Jorge Silva
Rohingya Gridlock: Amnesty Accuses Myanmar of Crimes Against Humanity
“They compelled us to leave Myanmar. Nine days ago, I reached Bangladesh along with hundreds of my neighbors from my village. Here, I am a penny less refugee now. With 10 members in my family, I am living in a small tent made of shreds of plastic. I feel humiliated having to wait in long queues for a little amount of relief material, but there is no option," he added.

Other refugees have similar stories of misery. The refugee camps erected by the Bangladesh administration are full to the brim with thousands of refugees now forced to live in the open on roadsides or barren land.

"I arrived here at Kutupalang camp 6 days back. It took me 5 days to walk up to here,” Razia, who used to live at Mannarpara village of Arakan state, told Sputnik.

© AP Photo / Dar Yasin
Rohingya Crisis: Bangladesh Warns World Community Not to Overlook Security Threat
"To me, it was a nightmare when I saw a group of around 20 soldiers approaching our house. We were in the neighborhood when we heard their sounds. We came back to our house only to confirm they were indeed coming. My husband and I, along with our five children, immediately started fleeing towards the jungle. As we were running away, my husband was shot in the head by the Army and he died. Then they torched our house. I rushed to the Bangladesh border with another 56 people of my village. I even did not get the chance to bury my husband Oaji Ullah's dead body," she adds.

Bangladesh and Myanmar have worked out an agreement to set up a mechanism to facilitate the return of the Rohingya refugees back to Myanmar. But most of them fear that they will meet the same fate as their murdered kins once they reach Myanmar.