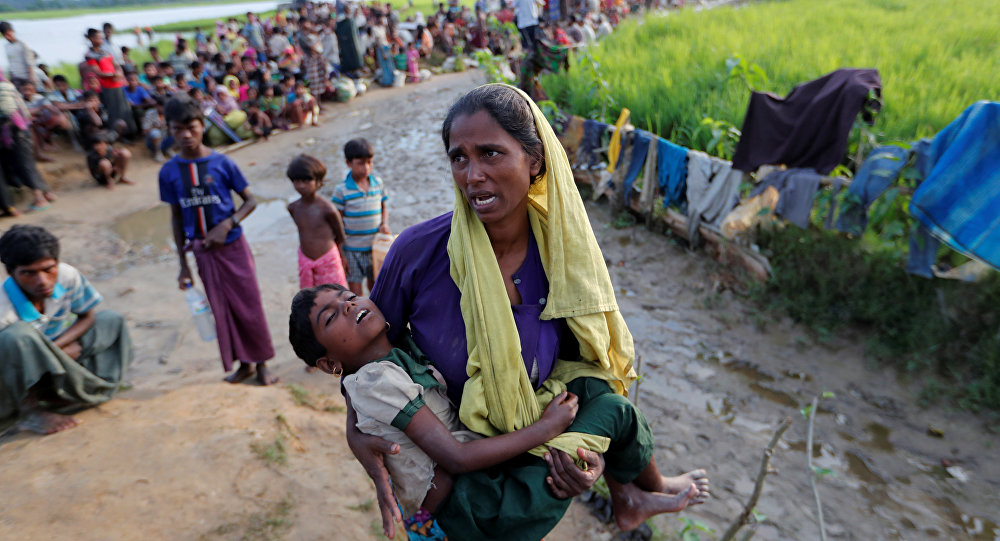 In the latest outbreak of violence two Rohingya survivors have told Sputnik their blood-chilling stories after they fled their homes and came to Bangladesh. More than 600,000 Rohingyas from neighboring Myanmar’s northern Rakhine province have escaped after their villages were reportedly attacked or burned by Burmese soldiers.

“They killed my whole family; they killed my grandfather, grandmother and father. They burned the mosque also. I fled from there with my husband and my small kid. I don’t know how and where my brother and sisters are, whether they are alive or not,” Azra, a Rohingya survivor, told Sputnik.

She further said that the army usually came at night and started burning and looting the houses and harassing the women. “They have no mercy, I pleaded before them to save my father and grandfather, but they did not listen to me and killed all of them,” Azra added.

© AFP 2019 / MUNIR UZ ZAMAN
Rohingya Refugees Fleeing From Myanmar to Bangladesh Just Want to Survive
The Rohingyas fled their homes after Myanmar’s army launched a military campaign in response to an attack by Rohingya fighters on dozens of police posts and an army base on August 25.

The refugee numbers coming to Bangladesh are devastating and there are many daunting challenges in camps where there is no clean water or sanitation, and where the outbreak of disease seems impending. For people who have narrowly escaped death the current situation is petrifying.

“We are living in a precarious condition. Ever since I left my homeland, the situation has not improved much. I am living in this camp. In fact, my life is worse than that of an animal. The only difference is that we are not attacked by anyone and here no one comes at night to burn our houses. But the situation is very, very difficult. My children are hungry and it’s difficult for me to feed them three times a day,” another survivor who wished to stay anonymous told Sputnik.

With such an influx of refugees there are immense challenges in the camps in Bangladesh as there is not enough food, water and medicine. Roads around the camps are filled with human excrement and the UN has expressed concern saying that this could be the biggest refugee catastrophe.

“They killed my husband and my brother and sister. I reached here after a long and arduous journey. I appeal to all of you to help me out of this situation. I cannot explain my condition, if I am staying here then the big question is how will I feed my children, whereas if I choose to go to my homeland, I have to bear the brunt of the army in Rakhine. They are ruthless,” the woman said.

© AFP 2019 / MUNIR UZ ZAMAN
Bangladesh Awaits Myanmar’s Response to Rohingya Repatriation Proposal
She said that she hopes to return to her homeland one day and that she just wants to live a normal life.

“We had been living in Rakhine for a long time. My grandfather used to live there and I was living with my family,” the woman said.

The Rohingya have been described as the “world’s most persecuted minority.” They accuse the Myanmar Army, which has committed atrocities against the ethnic group before, of using an attack by a Rohingya armed group as a reason to force the community out of Myanmar.