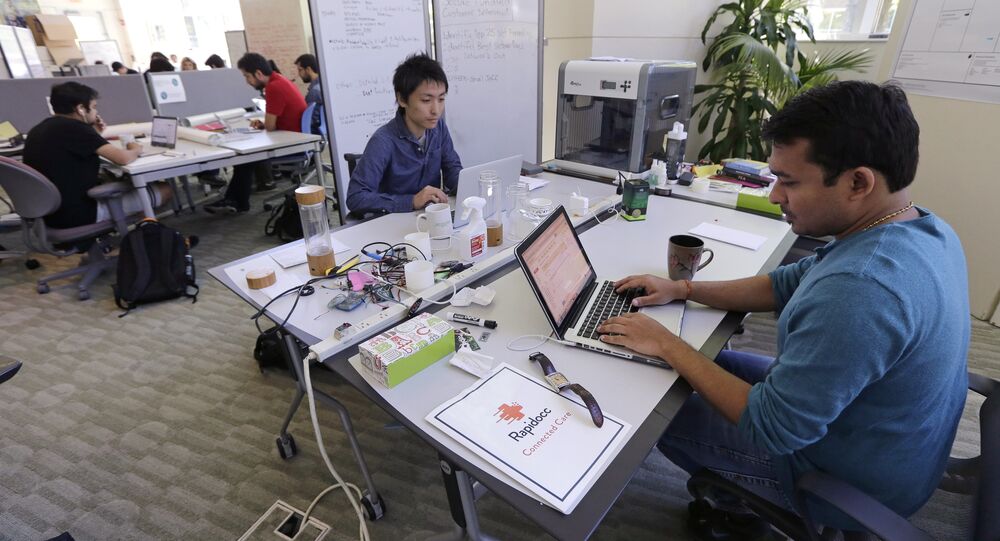 The $143 billion Indian IT industry derives 60 percent ($65 billion) of its total export revenue of $108 billion from the US market alone which is vulnerable to President Donald Trump’s ‘America First’.

New Delhi (Sputnik) – New Delhi has once again conveyed its strong concern to the US over the proposed restrictions on H-1B visa – a short-term visa granted to skilled professionals from foreign countries – in line with President Donald Trump’s 'America First' policy.

India’s External Affairs Minister Sushma Swaraj, during a meeting with a visiting nine-member US Congressional delegation from the house committee on science, space, and technology, sought bipartisan Congressional support for India’s concerns.

"Swaraj flagged the issue of H-1B visa as a strong concern and sought bipartisan Congressional support for the same," Raveesh Kumar, spokesperson, India’s Ministry of External Affairs tweeted after the meeting in New Delhi.

EAM @SushmaSwaraj flagged the issue of H1B visa as a strong concern and sought bipartisan Congressional support for the same. pic.twitter.com/g2ZZSyJGX7

​This was the second time in a week that India raised the issue with the US. A few days ago, India’s Finance Minister Arun Jaitley had also raised the H-1B visa issue during bilateral meetings with the US Treasury Secretary and the US Commerce Secretary in Washington D.C.

© AP Photo / Altaf Qadri
India Trying to Solve Visa Issue With US
Jaitley made a strong case for reforms in H-1B/L1 visa processes and social security contribution so that high-caliber Indian professionals serving American interest are not unfairly deprived of their well-earned money.

"People who come in the US through H-1B visa are high-value professionals which heavily contribute to the economy of the United States. They are not illegal economic migrants. And that is why the US should treat them with a different and better perspective," Jaitley said.

Indian skilled workers mainly from IT sector is the largest group of recipients of the 65,000 H-1B visas issued each year to new applicants under a cap mandated by Congress. However, the actual number of Indian nationals working in the United States under the H-1B program is quite large because of some of the exemptions available for Indians and roll over visa. H-1B is a temporary visa program used to bring foreign workers to the United States to fill high-skilled jobs.

India Tells US it Will Not Deploy Troops in Afghanistan

India, US to Expand Defense Cooperation After Mattis' Visit - Minister